REFLECTION ON A MISSION TRIP TO BELLE GLADE – FLORIDA 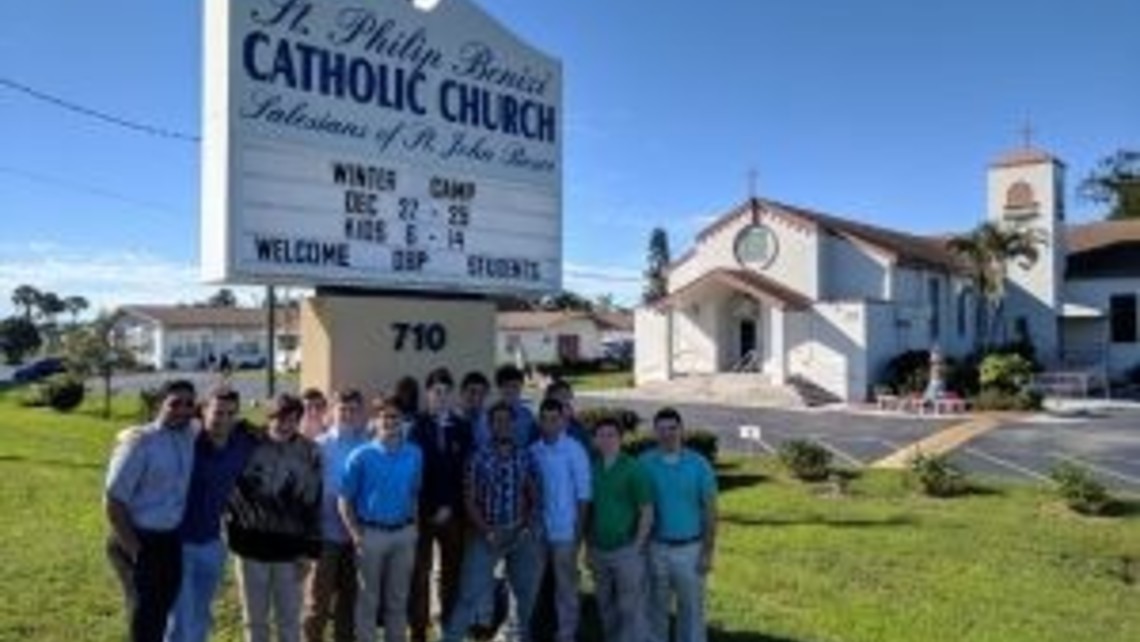 Danny Devins, Eric Frank, Paul Keenan, Trent Martini, Aidan Shatouhy, Marcus Truscio, Brandon Wertheimer, Drew Wilmot, and I – along with faculty members Bro. Sasika Lokuhettige, Bro. Travis Gunther, and Karen McNamara were preparing to go on a spiritual journey to a city once known as the AIDS capital of the United States and is now stricken by unfathomable poverty.

We boarded a plane to Miami, and when we touched down, we were received by Fr. Matt DeGance. Shortly after our arrival at St. Philip Benizi parish in Belle Glade, Fla., at around 11:00 a.m., we met with the 27 teenagers of Belle Glade who, along with us, would be counselors at the three-day winter day camp for children ages 6-14. This was an opportunity to meet our fellow counselors as well as a chance to finalize the planning for the coming camp. Before we knew it, though, the first day was over and it was time for dinner and, shortly thereafter, bed.

The next morning, December 27, we were up for Morning Prayer and Mass with the Salesians at around 8:00 a.m. Immediately after Mass, it was time to start our first day of camp. None of us really knew what to expect, or how the kids would respond to us. The only thing we knew was that we had three goals for the trip, and as long as we accomplished those three goals, the trip would be worth it.

First and foremost, we had to love the kids whom we were working with. Second, we had to grow in faith. This, we felt, would flow naturally simply from being in Belle Glade because anyone who goes to Belle Glade and works with children who live in situations as dire as these children live in, will grow in faith. It is impossible not to see God in the faces of these lively and loving children. Last, we had a goal of having fun. This was, perhaps, the most complex goal of all. It would have been very easy to go to Belle Glade and do our own thing instead of being with the kids of Belle Glade and interacting with them. There is no doubt that we would have had fun that way, but as Bro. Travis warned us, if we forgot the first two goals and only accomplished the last, it would have been a great trip, but it wouldn’t have been a mission trip.

With these goals in mind, we set out on our first day of camp attempting to accomplish each one. The day truly flew by, filled from beginning to end with activities that included soccer to arts and crafts and even a period for the campers to go to confession. Our day did not end there, though, as Fr. Matt decided to take us into the heart of Belle Glade. He took us to visit the trailer of a boy who is ten years old and has already done prison time. The trailer was very small, especially considering there were 16 kids living in the single-room trailer. Unfortunately, this is not an isolated circumstance. There are hundreds of families in Belle Glade with similar situations, and almost no way out of them. Parental guidance can be minimal to altogether missing from their lives. For many of the kids, the church is their main exposure to any form of goodness.

Soon enough, day two was upon us, and once again, armed with our three goals, we set out for another day of camp. Once again, we spent a day loving the kids, growing in faith, and having fun, but this time it was at the ice-skating rink. For many of the kids, it was the first time they had seen any form of solid ice. The part of ice skating that had the most impact for us was when the kids got on to the ice and quickly began seeking help from us. For us, this symbolized their trust in us even though they had only known us for about a day and a half at that point. It indicated that we had been doing something right. After camp, the night was capped off with a friendly (and unfair) game of manhunt with our fellow camp counselors; all the Belle Glade kids knew the best hiding spots. For that reason, it took us one hour to find about four kids. Day two was done, and one thing was certain: we had loved the kids, we had grown in faith, and we had loads of fun doing it.

Friday, December 29, the third and final day of camp came quickly, and we were ready to close the camp out with another day filled with love, growth, and fun. Activities resumed similar the first day, but this time the camp day was capped off with a children’s Mass. It was a perfect ending to a beautiful three days of fun with the kids.

The three days flew by all of us, but what was most important for all of us was that we had all, in our own way, accomplished all three goals of loving the kids, growing in faith, and having fun. As affirmation of this, when Fr. Matt asked all the campers how many of them would like to see us back for the summer camp, every hand in the room shot up. For as much as we taught the kids of Belle Glade, they taught us more than they could ever know. We were shown what true struggle looked like, and they gave us a perfect example of holding fast in our faith no matter the situation because God will always provide. All of us who went have been permanently changed for the better because of this life-altering mission trip.

This call is for all of us—consecrated and lay! END_OF_DOCUMENT_TOKEN_TO_BE_REPLACED

Awareness of our Salesianity through using old booklets and comics. END_OF_DOCUMENT_TOKEN_TO_BE_REPLACED

Thank you to all who made some time to join in the fun! END_OF_DOCUMENT_TOKEN_TO_BE_REPLACED