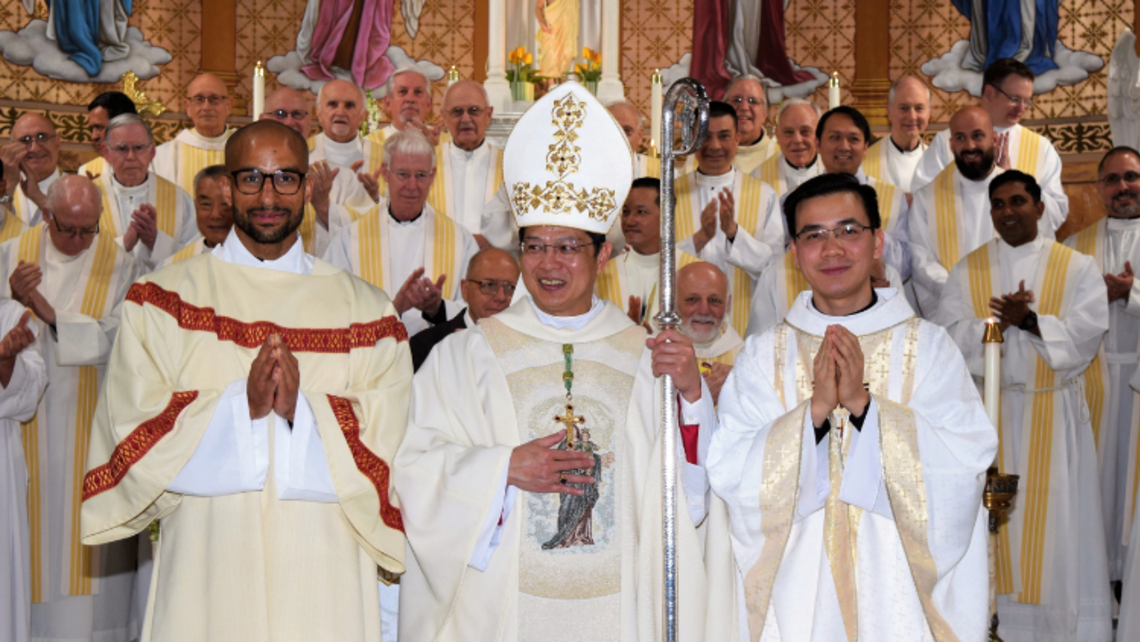 On Saturday, May 28, one Salesian was ordained to the presbyterate and another to the diaconate at Our Lady of the Valley Church in Orange, NJ. They were Fr. Ky Nguyen and Dcn. Branden Gordon. Both men belong to the Salesian province of St. Philip the Apostle, which covers the Eastern USA and all of Canada.

The Most Rev. Vincent Nguyen, Auxiliary Bishop of Toronto, presided and preached. Also participating were 31 Salesian concelebrants and 3 other priests and Deacon Richard O’Hara from Seton Hall University. The Vietnamese choir from St. Cecilia Church in Rockaway, NJ, and a schola organized by Br. John Castonguay, SDB, provided an abundance of beautiful sacred music.

Another dozen SDBs, three FMAs, several Cooperators, students from Salesian High School (New Rochelle) and Don Bosco Prep (Ramsey) and youths from St. Benedict Church (Etobicoke, ON), numerous members of the Nguyen and Gordon families, and parishioners from Our Lady of the Valley, Our Lady of Czestochowa in South Plainfield, NJ, and St. Cecilia also participated enthusiastically in the sacred rites. Many others tuned in via the livestream from Our Lady of the Valley Church’s Facebook.

Bp. Nguyen (no relation to Fr. Ky) began his homily (which he delivered once in English and once in Vietnamese) by thanking the families and formators who had shaped the vocations of the two ordinands and asking for continued prayers for them. He then encouraged Dcn. Ky and Br. Branden to continue in their service to the Lord and their trust in him, to live out the Psalm response, "Lord, I have come to do Your will."

The bishop told the ordinands that God has chosen them and now is raising them up, transforming them for the benefit of his people. He went on to summarize the diaconal and presbyteral responsibilities they’re undertaking, basing his words freely on the Rite of Ordination.

The bishop reminded both Dcn. Ky and Br. Branden that they’re being charged to proclaim God’s Word, not their own, and to proclaim that Word by their manner of life. They are to follow the example of Christ, the Supreme Priest, in his example of service and of giving his life as a ransom (cf. Matt. 20:28, from the day’s gospel)—an example for both orders, presbyterate and diaconate. He further reminded them of what Pope Francis teaches in Evangelium Gaudium, that ordination is for the service of God’s people. The ordained are not exalted over others but are given priestly powers to administer the sacraments, serve God’s people, and lead them to God the Father. Having done so, on the Last Day they will be welcomed into the joy of the Lord.

Following the two-hour-plus Mass of ordination, dozens of photos were taken of newly ordained Fr. Ky and Dcn. Branden and their families, the Salesians, and others. Fr. Ky spent about an hour blessing everyone who approached him, beginning with Bp. Nguyen and Fr. Tim Zak, and he continued giving blessings at the reception.

Our Lady of the Valley provided a magnificent reception in the parish youth center with a varied buffet, refreshments, and desserts.

Fr. Paul Ky Nguyen was born in 1986 at Dakmil, Vietnam. He is the son of the late Peter Minh Xuan Nguyen and Mary Hoang Dang. He got his early education in Vietnam, up to a B.A. in material science from the University of Natural Science in Ho Chi Minh City (Saigon), Vietnam. He recently graduated with a Master of Divinity in Pastoral Ministry and a Master of Arts of Theology from Immaculate Conception Seminary, attached to Seton Hall University, in South Orange, NJ.

As the son of a past pupil, Fr. Ky knew the Salesians early in life. He entered the Congregation as a candidate in 2004 and made his novitiate in 2010-2011 in Ho Chi Minh City, professing first vows on August 14, 2011. Fr. Ky completed his practical training in the Salesian boarding school at Bao Loc, Vietnam. There, he taught computer science and provided general assistance to the students.

After immigrating to the US in 2016 to rejoin his family, who had already immigrated, he made his perpetual profession on August 17, 2019, at Haverstraw, NY. From 2017-2018, he served as a campus minister at Salesian High School in New Rochelle, NY. During his time as a student of theology at Immaculate Conception Seminary, he resided in the Salesian community of Orange, NJ, and continued youth ministry activities there.

Fr. Ky wrote that "vocation is a journey of faith." He cited the example of our Blessed Mother and has intended to say "Yes" to God as Mary had, as well as "rely on God’s help through the intercessions of Mary, of St. John Bosco, of St. John Vianney, of Padre Pio, and of all faithful people who have been praying and supporting [him] on [his] vocation."

Fr. Ky will return to Vietnam to celebrate a thanksgiving Mass in his hometown. Starting on Friday, July 15, he will join the Salesian community of Marrero, LA. There, Fr. Ky will serve as community treasurer and teach religion at Archbishop Shaw High School.

Dcn. Branden Gordon was born in Toronto, ON, in 1987. He is the elder of Ronald Gordon and Rita Pipito’s two sons. Dcn. Branden met the Salesians while in high school. A conversation with Fr. Frank Kelly of St. Benedict Parish in Etobicoke, ON, led Branden to further spiritual seeking and an eventual return to religious practice. Fr. Frank’s "unflagging cheerfulness and personal warmth" was backed up by the example of other Salesians in the parish, particularly Fr. Mike Pace, Fr. John Puntino, and Br. Bernie Dubé. He got involved in the parish’s youth ministry and developed a relationship with God.

After high school and university, Branden worked for Toronto Parks and Recreation for nearly ten years, then became a teacher. His parents had already inspired in him a concern for young people. This, together with an interest in religious life, induced him to consider becoming a Salesian.

Branden became a Salesian candidate in the Etobicoke community in April 2013, where he was guided by Fr. Puntino, who at the time was serving as director. As they studied Don Bosco’s Memoirs of the Oratory together, Fr. Puntino convinced him "that there was something special about the Salesian charism." At the beginning of 2014, he began prenovitiate at Holy Rosary Parish in Port Chester, NY; he was a novice in Rosemead, CA, in 2014-2015 and made his first profession of vows on August 16, 2015, in Port Chester.

During two further years of formation in Orange, NJ, he was influenced by Br. Tom Dion as a formator and spiritual director. He did his practical training at Salesian High in New Rochelle from 2017 to 2019, teaching religion to freshmen. In 2019, he returned to the Orange community and began theology studies at Immaculate Conception Seminary in South Orange. He has spent his summers back in Canada brushing up on his French, which he admits has been a challenge for him.

His apostolic work in Orange has included helping with RCIA and other catechetical programs as well as some dramatic presentations at Our Lady of the Valley Church. Last summer, he assisted with the Bosco Bicycle program conducted by Seminaire Salesien in Sherbrooke, QC.

Dcn. Branden wrote that, as he enters his tenth year of formation to the priesthood, he “trusts that...the good Lord will continue to be with [him] on this journey towards the priesthood and that He will help [him] to persevere in fidelity” for the rest of his days.

Dcn. Branden will spend the summer in the Port Chester community, where he will gain practical pastoral experience as a deacon under the guidance of Fr. Pat Angelucci, the pastor, and the rest of the parish clergy and staff.

A third Salesian, Br. Joshua Sciullo of Jacksonville, FL, will be ordained to the diaconate on Saturday, June 12, in Jerusalem.

View photos from this beautiful event.

For all consecrated religious and all those discerning a vocation to the consecrated life. END_OF_DOCUMENT_TOKEN_TO_BE_REPLACED

The mission puts who we are and what we do in a few words. END_OF_DOCUMENT_TOKEN_TO_BE_REPLACED