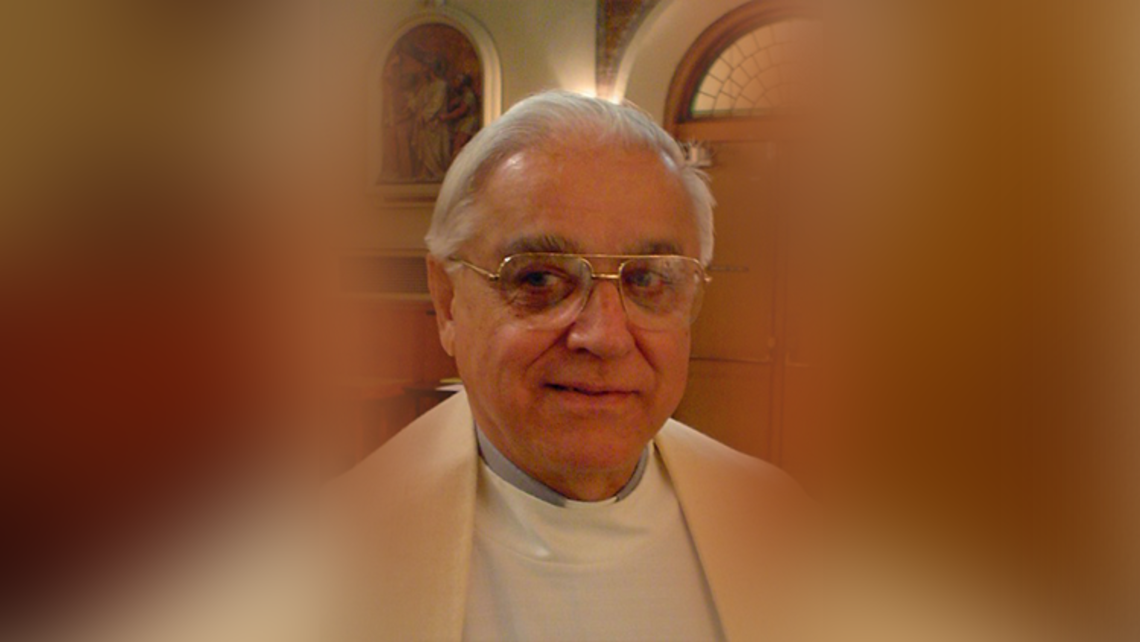 Fr. John George Masiello, SDB, died at Seasons Hospice in Tampa on Saturday afternoon, October 24. He was 91 and had several medical ailments, including most recently a positive Covid test. He had been a professed Salesian for 72 years and a priest for 62 years.

John Masiello was born in Grantwood, NJ, on June 19, 1929, to Pasquale and Maria Costanza Giorgio Masiello. He was baptized at Epiphany Church in Grantwood on June 15, 1930. The family later settled in St. Albans, Queens, where John was confirmed at St. Catherine of Sienna Church in 1940 on his 11th birthday. He was an altar boy as a teenager.

After his high school graduation, John entered the Salesian seminary at Don Bosco College in 1946 and made his year of novitiate in 1947-1948 at Newton, followed by first profession of vows on September 8, 1948, and the then-customary three years of philosophy studies and a B.A. degree in 1951.

Bro. John did his practical training by teaching, coaching, and assisting the pupils at Mary Help of Christians School in Tampa in 1951-1953 and at Don Bosco Prep in Ramsey, NJ, in 1953-1954. He made his perpetual vows at Newton in 1954.

Many years of Salesian ministry in schools followed. Fr. John was prefect of studies for a year at Don Bosco Juniorate in Haverstraw (1958-1959), then catechist (campus minister) and teacher at Mary Help in Tampa for five years (1959-1964). The Salesians provided Sunday Masses at various parishes in the Tampa area, and in Brandon Fr. John became a close friend of the Mendl family, whose father also was from Queens, and he “recruited” young Mike, one of his altar servers, for the junior seminary in Goshen.

From Tampa Fr. John moved on to Don Bosco Tech in Boston for two years (1964-1966), still as catechist and teacher. In 1966 he was appointed director of Salesian High School in New Rochelle, where he served for six years, also teaching and mentoring many young Salesians. He oversaw the enlargement of the school with the addition of two classroom floors above the chapel and the rise in enrollment to nearly 500 boys.

In his 15 years as a middle school and high school teacher, at different times Fr. John taught religion, English, history, and Latin; coached tennis and basketball; handled the library; and offered counseling. His schoolwork continued for one more year (1972-1973) with an appointment as the province’s delegate for religious education in the schools while residing at the Marian Shrine in Haverstraw.

In Port Chester, he had the challenge of filling the shoes of the venerable Fr. Peter Rinaldi upon his retirement after 29 years, and (according to parishioner James Gambino) he did so with “enduring fortitude, wisdom, dedication, and love for the people.” He expanded religious and social programs in the parish, involved the youths of the parish in liturgy and other forms of prayer as well as in social activities, and coordinated the parish’s changing demographics as the village’s population changed due to new patterns of immigration.

At age 78 came another change: back to Tampa as part of the community of semi-retired confreres at St. Philip the Apostle Residence. Fr. John remained active for several years by assisting with parish Masses, preaching retreats, and hearing confessions. Eventually, health problems put an end to that.

One former Salesian, Kevin Brophy, sent this note: “I didn’t know him personally but his reputation was impeccable.”

Well into his senior years, Fr. John retained his enthusiasm: “The Salesian vocation has been the best!  Fifty years of priesthood [as of 2008] have passed quickly and with a variety of priestly experiences. It was never boring!”

Funeral arrangements can be found here. Information on next-of-kin is being sought.

It was a stellar experience of Salesian education, fraternity, and spirituality. END_OF_DOCUMENT_TOKEN_TO_BE_REPLACED

They will be ordained to the priesthood and diaconate on Saturday, May 28. END_OF_DOCUMENT_TOKEN_TO_BE_REPLACED

Two of the graduations took place on Wednesday, May 18. END_OF_DOCUMENT_TOKEN_TO_BE_REPLACED