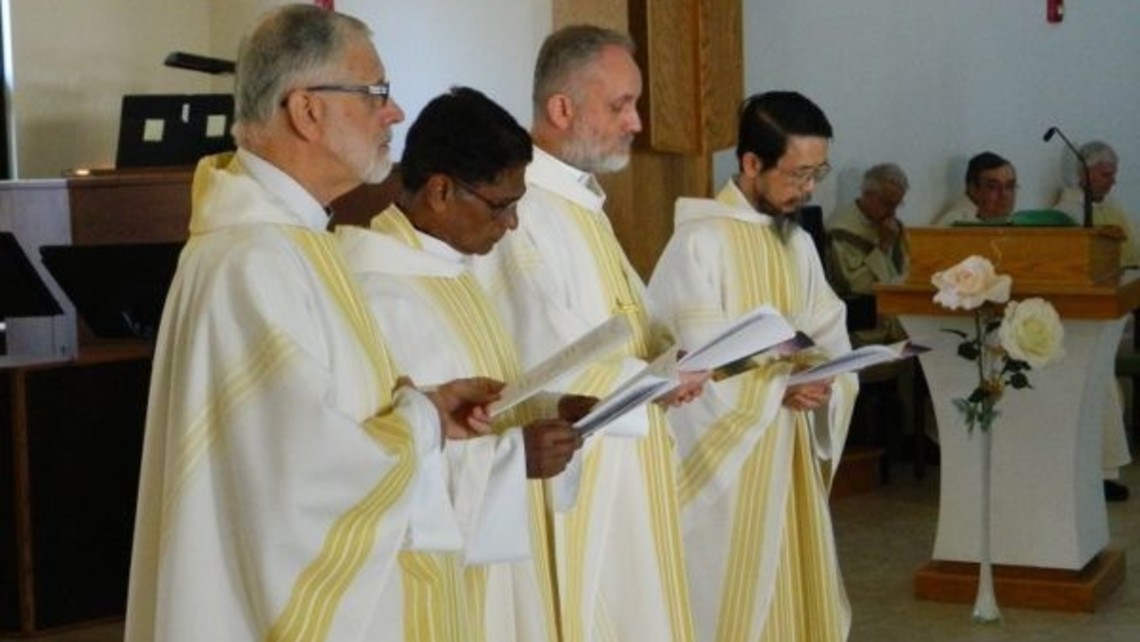 (New Rochelle, NY – September 23) – Almost a millennium is a very long time! On Saturday, September 21, the Salesians took note of 995 years of holy fidelity to the Gospel and the mission of Don Bosco displayed by 20 confreres celebrating 25, 40, 50, and 60 years of religious profession and/or priestly ordination in 2019—three of the 20 having double anniversaries.

Of the 20 men, 14 were able to take part in the celebration at the Marian Shrine in Haverstraw, N.Y. As usual, many members of the Salesian Family, the families of the jubilarians, alumni, parishioners, and other friends of the Salesians were also present.

Fr. Tim Zak, provincial of the Eastern U.S. and Canada, presided and preached. Twelve priest jubilarians and another 38 Salesians concelebrated with Fr. Zak. Two of the jubilarians, Bros. Rich Pasaik (60 years) and Bro. Tom Dion (25 years), are brothers and did the readings at Mass.

Bro. Pasaik and Fr. Frank Twardzik were the senior jubilarians present; they pronounced their first vows on September 8, 1959.

In addition, Frs. Moreno and Pallithanam were celebrating their 40th anniversaries of ordination (May 26 and December 29, 1979, respectively).

A banquet followed at Patriot Hills in Stony Point, NY.

Fr. Zak’s homily focused on holiness as the goal of Don Bosco’s educational system, exemplified in the lives of three youths whose biographies our Founder published as models for his youngsters as well as for Christians in general: Michael Magone, Francis Besucco, and Dominic Savio. Each boy was different and followed a different path of growth toward sanctity. Citing the day’s reading for the feast of St. Matthew from Ephesians, Fr. Zak said that each boy grew into “the full stature of Christ.”

The Oratory was “a factory of sanctity,” Fr. Zak stated. That holiness has been amply demonstrated in the lives of American Salesian saints—he listed nine blesseds and venerables—and then noted that the jubilarians in their Salesian lives and different forms of ministry, taking Christ as their guide and companion, likewise have shown how to grow into that “full stature,” as apostles, friends, and inspirations to the young and to the Salesian Family.

The full text of the homily is presented elsewhere in this issue of Salesian News.

Two groups each spent a week of service, prayer, activities, and brotherhood. END_OF_DOCUMENT_TOKEN_TO_BE_REPLACED

All six newly professed sisters were guided in their novitiate at Newton, NJ. END_OF_DOCUMENT_TOKEN_TO_BE_REPLACED

Communication is to channel messages from above and honor inspiration every time. END_OF_DOCUMENT_TOKEN_TO_BE_REPLACED