My Experience with Migrants and Young People in Tijuana 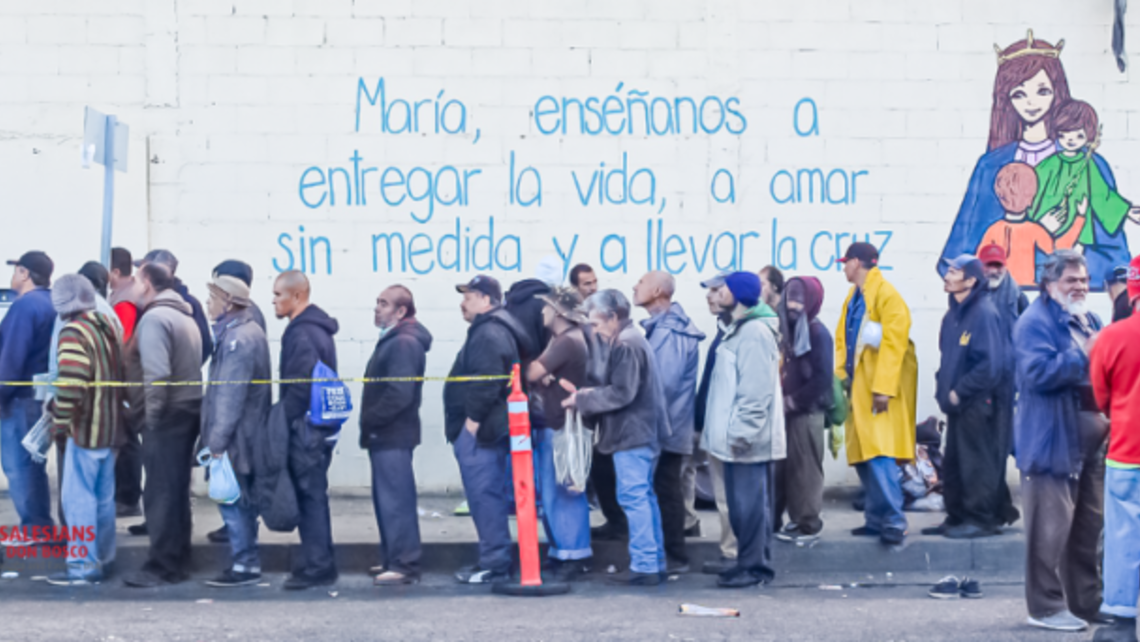 From November 18-December 28, 2019, one other member of my community from CRESCO and I had the unique opportunity to be sent to spend our apostolic experience with the Salesian community in Tijuana, Mexico. It sits on the border of California, right below San Diego. We integrated ourselves into the community, which consisted of six SDBs and 10 lay volunteers evenly divided into two houses. This was due to the size of the city and the distance between the Salesian works.

Once there, we were quickly immersed in all of the work and service. Our days consisted of helping serve and sometimes coordinate with the volunteers in the “Desayunador Padre Chava,” which serves as a shelter for immigrants who need a place to live. It is also a soup kitchen that receives about 600-700 people daily during the hours of 8:30 a.m. – 11:00 a.m. They serve quality food and offer services such as haircuts, telephone calls, legal, medical, and psychiatric help. As of January 2020, about 40 men lived there, the majority having a job outside the shelter. The rest who are unemployed help with all the maintenance, preparation, and service in the food kitchen.

In the afternoons, the two of us and one other volunteer were assigned to help at one of the nearby Salesian parishes. As we helped with various activities, we had the amazing blessing to begin to visit a Migrant Refugee Center, which was about a five-minute walk from the parish. Many from the center also attended Mass Sunday mornings. Moreover, we began to organize some games and activities after Mass. Additionally, we began visiting frequently to talk with the families and creating a small oratory experience with kids. One of the most beautiful experiences was that they asked the community to celebrate the Christmas Eve Mass directly in the shelter. Being able to celebrate Christmas Eve Mass with so many people from foreign places was a great testimony of the true spirit of Christmas. It was also a reminder of the joy and hope we have and hope to receive in Christ.

During my time in Tijuana, news spread of the tragic death of a 16-year-old from the flu while in a US Border Camp. He was the sixth migrant child who died after having been detained while entering the US in less than a year. When I heard the news, it had a great impact on me, more than ever before. Not only was this teen from Guatemala, where I have been living and serving the youth there for a year, but his death affected me after I personally heard many migrants’ stories and lived closely with them. I heard countless experiences of how they crossed the border and were detained in border holding cells. In addition, they described the process to seek asylum in the US and the difficulty they face under harsh conditions.

I will never forget the many people I personally met and talked to each time I hear news about immigrants seeking asylum. I pray we may continue to find ways for the countless people who seek refuge in other countries to escape violence and have a better home.

Let’s explore the experience of dying and rising a bit more. END_OF_DOCUMENT_TOKEN_TO_BE_REPLACED

It was beautiful to see students come into the retreat. END_OF_DOCUMENT_TOKEN_TO_BE_REPLACED

The Opening Mass will begin at 5:30 pm ET on Friday, January 20. END_OF_DOCUMENT_TOKEN_TO_BE_REPLACED