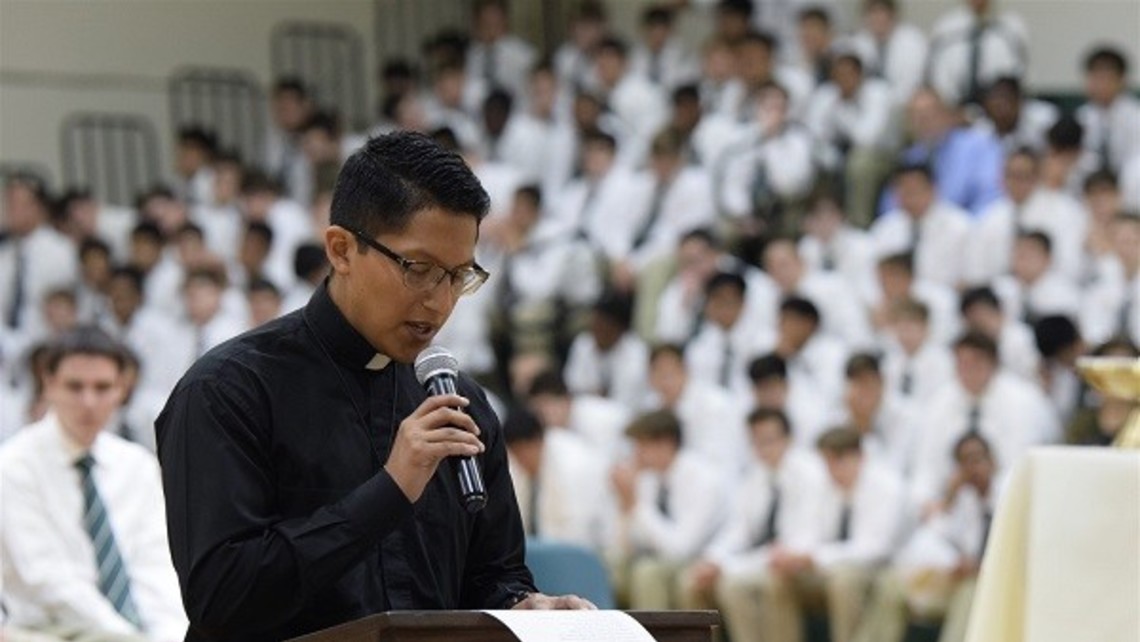 (Marrero, La. – August 17) – Archbishop Shaw High School in Marrero opened the 2018-2019 school year with a faculty retreat on Monday, August 6. The retreat was held at the Mt. Carmel Hall at the Church of the Infant Jesus in Harvey, La.

Presentations were given by Fr. Louis Molinelli, Shaw’s director-president, after the scheduled speaker had to cancel. Fr. Lou is experienced at such occasions, having given opening faculty retreat days for the archdiocesan administrators and several high school faculties, including Archbishop Hannan High School, Mt. Carmel High School, and Immaculate Conception Elementary School.

The retreat theme was “Growth in Holiness,” based on the 2019 Salesian strenna. Fr. Lou showed how we can all strive for holiness. He drew heavily on Pope Francis’s recent exhortation Gaudete et Exsultate. He also drew extensively from the writings of St. Francis de Sales, patron of our Salesian Family.

There was a mixture of group discussions and feedback to the entire assembly. The afternoon sessions were moderated by Mark Williams, ’84, principal, since Fr. Lou had to leave to preside over a funeral for an alumnus’s father/husband of a former president of the Parents Association.

The concluding Mass was celebrated by Fr. Larry Urban, SDB, pastor of St. John Bosco/St. Rosalie parishes and vice director for the Salesian community. Fr. Larry was assisted by Fr. George Hanna and Fr. Tom McGahee. Toward the end of the Mass, Fr. Larry offered a prayer of commissioning for the faculty and staff for the new school year.

A special event for the beginning of the school year was the Shaw Alumni Award Dinner. About 150 alumni and their spouses and families were in attendance. The food was catered by Maison Creole.

The first highlight of the dinner was the induction of Denise Vedros as a Shaw Honorary Alumnus. Mrs. Vedros, who has been teaching at Shaw for 33 years, chairs the mathematics department, moderates the senior prom, and coaches the bowling team, which has won several regional matches and gone to the state level.

The second highlight, the surprise of the evening, was the announcement of the Shaw Alumnus of the Year. This honor went to Jason Brown. Mr. Brown is a member of the School Advisory Board and on the L3C committee for the new stadium complex. His son, Jason, started 8th grade this year. Planning for this award was organized by Brandon Surrency ’03, the Advancement Office director.

Reformatted student orientations took place September 7-10. An entire day, September 7,  was dedicated to 8th grade orientation. After lunch the Peer Ministry group led the orientation. This was followed by outdoor activities such as swimming, Frisbee, cabbage ball, and gym games. Toward the end of the recreation period, the student government prepared snowballs (ices) for everyone.

The orientation days for the 9th through 12th grades were packed mornings with review of student handbook, use of portals, distribution of everyone’s chrome book computer, and general guidelines. Fr. Molinelli led off each morning with a prayer and talk. Mr. Williams facilitated the program and spoke at length about academic expectations. Each of these orientation days was finished by 11:00 a.m.

On the afternoons of these days, the faculty met at 12:30 p.m. for their orientation and meetings. These meetings generally ended between 2:00 and 2:30 p.m. It was a busy week for everyone as we settled into the new school year.

Solemnity of the Assumption

The highlight of the first week of school was the school-wide Mass for the solemnity of the Assumption. This Mass was special because Bro. Ronald Chauca and Bro. Josh Sciullo renewed their temporary vows (for three years) before the student body. The Mass also included the commissioning of the extraordinary Eucharistic ministers and the presentation of their medals and certificates, signed by Archbishop Aymond. Finally, toward the end of Mass the members of the executive board of the Student Government Organization and their two moderators were recognized and blessed.

There will be a video released each day of the novena. END_OF_DOCUMENT_TOKEN_TO_BE_REPLACED

This free event is open to everyone! END_OF_DOCUMENT_TOKEN_TO_BE_REPLACED

Thus, we can continue the historical and spiritual journey. END_OF_DOCUMENT_TOKEN_TO_BE_REPLACED