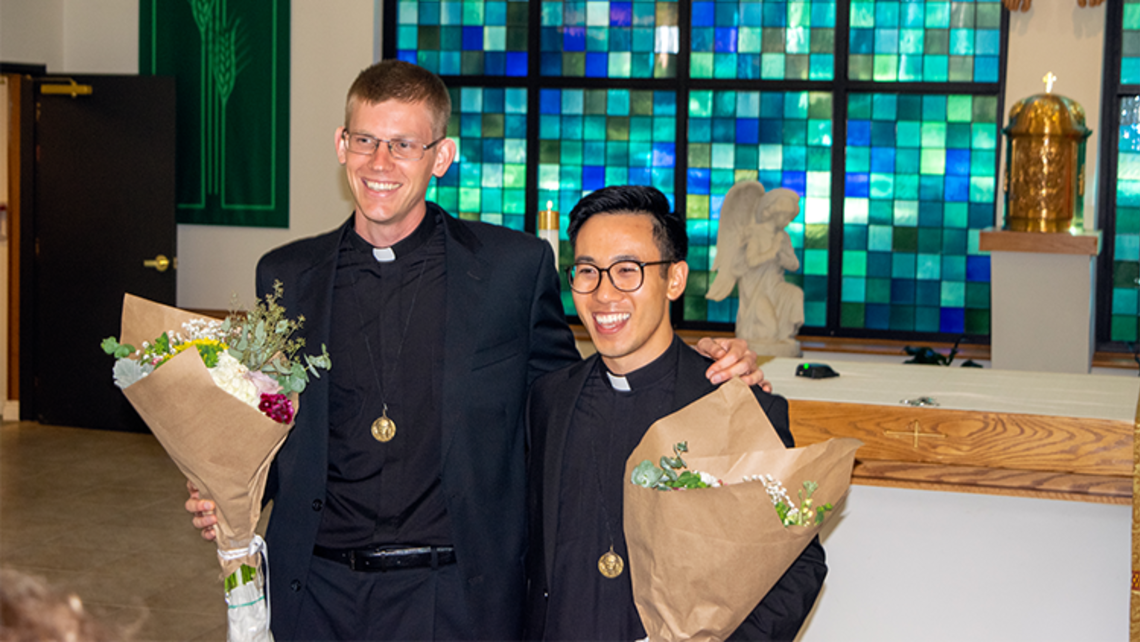 (New Rochelle, NY – August 15) – Brs. Paul Hotovy and Francis Nguyen made their first profession of vows as Salesians of Don Bosco and members of the New Rochelle Province on Sunday, August 15, at the Marian Shrine in Haverstraw, NY.

Fr. Tim Zak, provincial, received their vows, made for one year in accordance with the Salesian rule.

Twenty-five priests, mostly Salesians, concelebrated. Also taking part were one deacon, five non-celebrating priests, nine brothers, and one sister. Many members of the families of the two newly professed were present, members of the Vietnamese Eucharistic Youth, and Salesian Lay Missioners. Total attendance was about 150.

The Music Ministry Team of Don Bosco Prep in Ramsey and some members of Bro. Francis’s family provided music.

The two new brothers made their year of novitiate (2020-2021) at the Salesian house in Richmond, CA, under the guidance of Fr. Joseph Thinh Nguyen (no relation), master of novices, and Fr. John Puntino, socius. A third novice, Reegen Ledet of the San Francisco Province, professed vows separately in San Francisco, also on August 15.

All three of the newly professed brothers will join the Salesian formation community in Orange to further their Salesian formation and continue academic studies (philosophy and theology) at Seton Hall University in South Orange, NJ.

Br. Paul Augustine Hotovy was born in 1989. His hometown is Omaha, NE. His parents are Steven Hotovy and Marguerite Miller, and he has four brothers and a sister.

Paul became acquainted with the Salesians through Fr. Dominic Tran, who was taking spirituality courses at Creighton University in Omaha. He spent a summer with the Salesians in Chicago, helping with day camp. Working with the young sparked his desire to become a Salesian; that was reinforced by his experience as a teacher. He also felt a calling to become a priest. Several priests and Salesians have inspired him.

When he was accepted as a candidate in 2018, he was assigned to Don Bosco Prep, where he provided various forms of assistance during both his year of candidacy and his prenovitiate year; he also taught catechism at St. John Bosco Parish in Port Chester.

Br. Paul says that the best part of his novitiate year was the time he had for prayer and reflection. Now he looks forward to “living the vows with integrity, being a supportive confrere, and laboring in the field of evangelization.” He would like to be a teacher, in particular.

He adds: “I feel that God has blessed me with numerous graces in my life. There have been many people who have changed my life and helped me along the path of holiness—whether through a word of encouragement (or challenge), through a witness of fidelity to God, by showing me how to live out a virtue, or by making me laugh when I needed it most. I hope that God will use me to have a similar effect on others.”

Br. Francis An Nguyen, born in 1993, claims Annandale, VA, as his hometown. His parents are Vong Nguyen and Vinhsinh Bui, and he has two brothers and two sisters.

Francis met the Salesians by attending a cousin’s ordination and then speaking with Fr. Dominic Tran, vocation director, as well as with Salesians nearby in Maryland. He found inspiration in several priests and religious. He writes: “I wanted to become a Salesian because at the time I was discerning, I was involved with my parish youth group, which I found great joy in being a part of. I felt called to live a life dedicated to youth, and felt the Salesians were the place for me, especially after coming and seeing community life.”

On acceptance as a candidate, he joined the formation community in Orange in August 2018. The following year, he moved to Don Bosco Prep as a prenovice. He also assisted with youth ministry (recreation and catechism) at St. John Bosco Parish in Port Chester, NY.

For Br. Francis, the best part of his novitiate year was “being with the students [of Salesian College Prep on the same Richmond campus] whenever they returned to in-person classes. Those were moments when I was able to get to know them one-on-one or just play volleyball with a group of them.”

For the immediate future as a Salesian, his “aspirations are to deepen my motivations and continue to be open to the formation process. I aspire to make what ‘Salesian’ means to me a truly personal one.”

Br. Francis has a particular interest in nutrition, through which he believes he could be an asset to his confreres and to their apostolic mission.

Fr. Tim Zak began his homily by quoting the entrance antiphon for the day’s Mass of the Assumption of the Virgin Mary: “Let us rejoice in the Lord as we celebrate….” He credited the musicians with lifting the congregation’s hearts to God and noted our reasons for rejoicing: Mary’s Assumption, the first religious profession of two Salesians, and the renewal of vows of three men.

Fr. Tim described the Assumption as the completion of Mary’s journey and the fulfillment of God’s promises to her. Her journey began in the heart of God, proceeding to her immaculate conception, to her birth and on through her life of mothering Jesus. All of God’s plan for her was completed in her Assumption into heaven.

Fr. Tim cited St. Paul’s words that God will bring his work in Christians to completion; the two men professing today aspire to have God complete his plan in their lives, as he has already done for Mary.

We do not know what heaven is like, said the preacher. Mary’s Assumption, he asserted, gives us a glimpse. The Preface of the Mass acclaims her as an image and “a sign of sure hope and comfort” for the Church. The newly professed Salesians also are a sign of hope. They will live out radically their baptismal calling; they will be prophets for the faithful, demonstrating that nothing satisfies our human hearts except God. They will be witnesses of fraternity and community in a world often focused on individualism. They will fulfill a mission of service and not live for themselves. In their lives they will leave space for God’s grace. Their lives testify to the world to come, thus giving us a little view of heaven upon this earth.

The Virgin Mary gave herself to God without reservation, Fr. Tim stated. These two young Salesians will try to do the same.

After the profession Mass, Br. Paul told the province’s communications director, Julia St. Clair, “I’m very excited and grateful that my family and friends can be here. I’m looking forward to the future and whatever God has planned for me these next couple of years.”

Chris Holcomb, a friend of Br. Paul, told Miss St. Clair, “I’ve known Paul for ten years and walked with him in all the steps he’s taken. It’s been great! I’m also a seminarian in the Diocese of Pensacola-Tallahassee, and Paul inspired me to make this next jump and commitment.”

Br. Francis stated, “I feel grateful for this and am entrusting all things this day, especially to Mary. I’m excited to be back with my family, begin my consecrated life, and see what God has planned for me.”

His best friend, Patrick Nguyen (no relation), told Miss St. Clair: “We’ve been together since we were five and have known each other longer than that. It’s very emotional for me since we’ve seen him go and grow through everything. We also haven’t seen Francis in so long due to the pandemic.”

A catered buffet followed the Mass in the Marian Shrine’s outdoor pavilion.

These experiences became foundational in developing the family spirit of the Salesian charism. END_OF_DOCUMENT_TOKEN_TO_BE_REPLACED