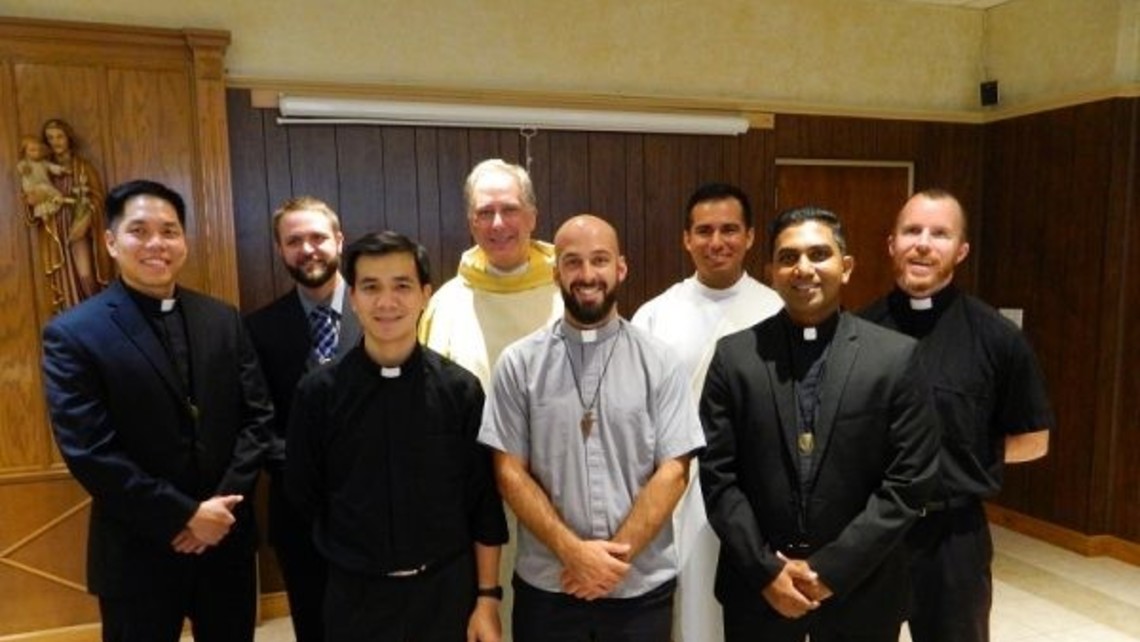 (Haverstraw, N.Y. – August 16) – In the middle of their annual spiritual retreat at the Don Bosco Retreat Center in Haverstraw-Stony Point, six young Salesians renewed their temporary vows on the solemnity of the Assumption, August 15, at a Mass presided over by the provincial, Fr. Tim Zak. Fr. Tim also preached.

In anticipation of making their perpetual profession during the planned visit of the Rector Major to the province next month, Bros. Steven DeMaio, Travis Gunther, and John Langan professed “until September 7, 2018.” Bro. Simon Song renewed his vows for three years and Bro. Sasika Lokuhettige for one year in accordance with their stages of postnovitiate formation. Bro. Ky Nguyen professed for one month with the intention of renewing for one year in mid-September.

On the same day, at Granby, Que., during the SDB retreat for (mostly) Canadian confreres, Fr. Derek Van Daniker and Bro. Branden Gordon renewed their vows for a three-year period before Fr. Richard Authier, presider at the Mass and former provincial of Canada (which is now part of the New Rochelle Province). And at Archbishop Shaw High School in Marrero, La., Bros. Ron Chauca and Josh Sciullo renewed their vows for three years in the presence of the student body on August 15. School’s already in session down South. Fr. Lou Molinelli, director of the SDB community on the West Bank of metro New Orleans, received their vows.

In the Mass celebrated at Haverstraw, Fr. Tim preached on the revolutionary nature of the Virgin Mary’s Magnificat (from the gospel of the day). Herewith a summary from my notes:

The text is so familiar to us, Fr. Tim said, that we may miss the revolutionary ideas that she voices, such as God’s putting down the mighty and raising the humble.

This “revolution” isn’t Mary’s doing but God’s. Mary just announces the divine gospel of social renewal. She praises the radical works that God has been doing.

Mary is not a pious image; she’s a woman of faith, the first disciple of Jesus. Our young Salesians are making a revolutionary, radical step. They, and we, lack the social supports that religious might have had in other times. The renewal of our Congregation that we’re called upon to make at this time, and the renewal of our vows, is an invitation to make a free and loving response to God’s love, to enter a relationship with him. Our personal weaknesses and past failures aren’t obstacles to him; they’re so tiny compared with what he announces as his doings in the Magnificat.

Our invitation is to surrender to him even our “baggage” and to make an absolute commitment to be faithful to the young and accompany them into a relationship with the Lord. Mary was a nobody attached to a nobody (Joseph) from nowhere (Nazareth). She has nothingness. These are the people whom God chooses—like us.

Mary is a sign of transformation—of what God can do with a life that’s open to him and to what he can do with us.

We ask for Mary’s help on our mission as our teacher and guide.

There will be a video released each day of the novena. END_OF_DOCUMENT_TOKEN_TO_BE_REPLACED

This free event is open to everyone! END_OF_DOCUMENT_TOKEN_TO_BE_REPLACED

Thus, we can continue the historical and spiritual journey. END_OF_DOCUMENT_TOKEN_TO_BE_REPLACED