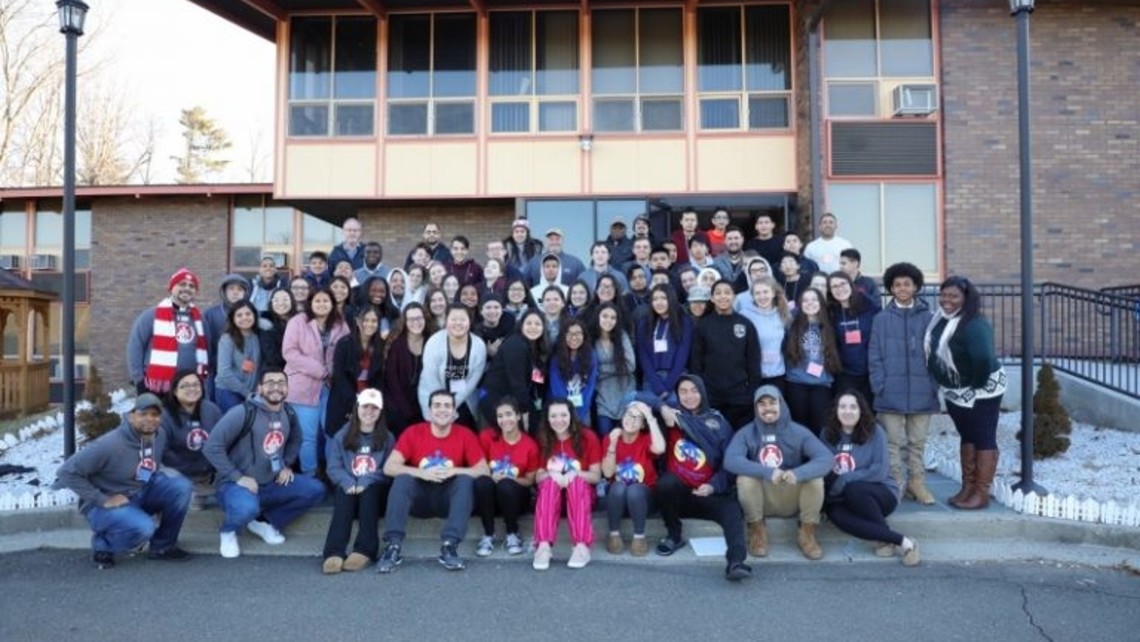 (New Rochelle, N.Y. – January 29) – The Province Office of Youth and Young Adult Ministry welcomed the Salesian Leadership Retreat back to the month of January after a two-year absence. The junior core team’s retreat took place on January 10-12 and the Salesian Leadership Retreat on January 12-14. The program at the Don Bosco Retreat Center in Haverstraw-Stony Point, N.Y., was co-led by Jessica Giglio (program coordinator) and Guilherme Lopes (Salesian Youth Movement coordinator).
We were blessed to have a total of 81 attendees (participants, adult chaperones, and team members), which was a significant increase since the January SLR in 2015, which totaled 56 attendees. Due to the three-year gap, we introduced a junior core team (consisting of college-aged young adults) in place of a young team; we hope to have a full young team next year, however.
Ten different ministries participated in this SLR: six Salesian parishes (Our Lady of the Valley in Orange, N.J., St. John Bosco in Chicago, Ill., St. John Bosco in Harvey, La., St. Rosalie in Harvey, St. John Bosco in Port Chester, N.Y., and St. Philip Benizi in Belle Glade, Fla.), one Salesian school (Le Salésien in Sherbrooke, Que.), and four non-Salesian parishes (St. Augustine in New City, N.Y., the Bensonhurst Cluster in Brooklyn, St. Michael in Netcong, N.J., and St. Thomas More in Hauppauge, N.Y.).
The theme for this retreat, like all the Salesian leadership retreats, was Don Bosco’s Oratory. In addition to being introduced to Don Bosco and the Salesian Oratory, the participants heard witness talks, engaged in small-group sharing, and had the chance to participate in Eucharistic adoration, Reconciliation, and the Eucharist. The participants were also introduced to the Salesian Youth Movement. After the closing Mass, the attendees gathered with family, friends, and SLR alumni in the retreat house cafeteria for a social sponsored by the Salesian Cooperators.
The participants brought great enthusiasm and showed a real desire to grow in faith and Salesian identity. Many of the participants say that they are looking forward to having leadership roles on future Salesian leadership retreats and participating in other upcoming events, such as Gospel Roads, Day Everyone Connects, and Empowering Salesian Leaders. The spirit of the Salesian Youth Movement continues to flourish.

Thanks to everyone who participated in the various events with Fr. Ángel and Fr. Hugo. END_OF_DOCUMENT_TOKEN_TO_BE_REPLACED

Thank you to everyone who helped with and prayed for this beautiful and historical visit! END_OF_DOCUMENT_TOKEN_TO_BE_REPLACED