SALESIAN FAMILY AND MARCHING FOR LIFE 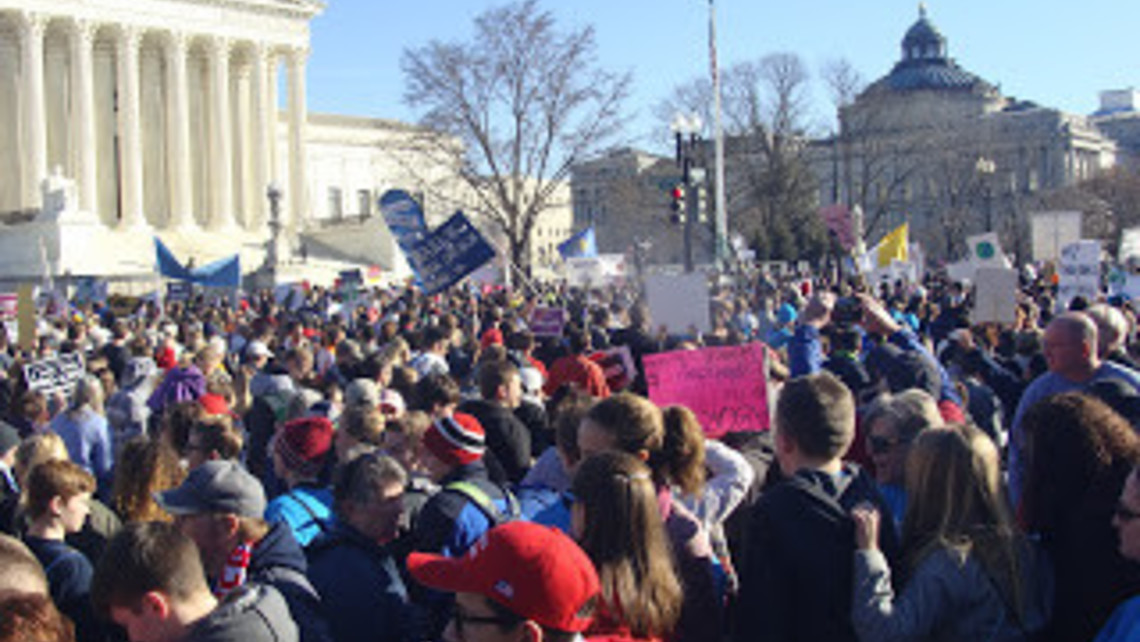 On Jan. 19, the 45th annual March for Life took place on the National Mall and the streets of Washington, D.C.  I don’t know why it was on the 19th this year rather than on the anniversary of Roe v. Wade, Jan. 22, which made abortion on demand the law of our country.

This year our protest march was blessed with sunny skies and unusually warm temperatures, reaching the mid-40s.  That fine weather probably helped bring out a crowd in excess of 100,000 (according to the March organizers).  It was the biggest turnout that I’ve taken part in, altho my last trip to D.C. for the March was in the 1990s, I think.

Fr. Dieunel Victor arranged for 50 Don Bosco Cristo Rey students and staff to take part, starting with the youth rally and Mass in the Capital One Arena.  (A few students canceled, but we still had 43 participants.)

Fr. Dieunel and I left our house in Silver Spring to drive downtown and park; while he went to meet the students at the Metro station, I went into the arena a bit after 5:30 and waited (praying the Breviary and the Rosary) for confessions to be set up.  The arena opened to the youths at 6:30, and very shortly all the confessors were busy.  I don’t know how many of us there were–maybe 4 dozen–set up in a 2d-level lounge, about 10′ apart.  No danger of anyone being overheard, due to a lot of ambient noise, including music from the arena floor.  Young people, their chaperones, and some others just kept coming for the sacrament, and we priests were busy for almost 2 hours, till confessions were shut down in preparation for the celebration of the Eucharist.

The March pilgrims came from all over the Eastern half of the U.S., as far away as Minnesota and Texas.  They came as church groups, school groups, associations of the faithful, and individuals.  We had Salesian groups from New Rochelle, Ramsey, N.J., and North Haledon, N.J., besides our DBCR contingent.

The arena seats 20,356 people (Wiki), and there weren’t many empty seats.  The clergy included Cardinal Wuerl presiding, Cardinal DiNardo, the papal nuncio, and about 20 other bishops; well over 100 priests, and various deacons.  There were many religious, seminarians, and of course the young people.  It was an enthusiastic crowd, and Cardinal Wuerl warmly greeted everyone before introducing each of the bishops.  Notwithstanding the size of the crowd and the arena venue, it was a reverent Mass from beginning to end.

After Mass, our DBCR group eventually made its way to the Natural History Museum to meet up with some of the other Salesian groups, then split up to find lunch.  I went with one group of 9 students to a taco place several blocks away (where I ate my brown-bag lunch of turkey and cheese sandwich and yogurt).  We all reassembled on the Museum steps at 12:15 and waited for the March.  Fr. Abe Feliciano addressed our assembly briefly (photo).

We could hear vague noises from down the Mall, the speeches going on, but nothing clearly heard.  After a while the Marching 100 from St. Augustine HS in New Orleans arrived on the street below us and played some rousing music.

The crowd was very orderly from beginning to end.  The most the D.C. police had to do was to remind people to stay

on the curb.  Even when a few (very few) counter-demonstrators appeared, the worst that happened was shouts of “pro-life! pro-life!” as they passed by.We started to move up Madison Dr. around 1:00 p.m. but didn’t get very far before everyone halted outside the National Gallery of Art on Constitution Ave., and we waited a long time for the March to get organized, at least half an hour and probably longer.The line of march finally got itself together and came up the avenue at 1:45.
It took us about half an hour to get onto First Ave. between the Capitol and the Supreme Court; the space filled up rapidly as the tide of marchers kept pouring in.  It appeared that some of the marchers fell back onto the Capitol grounds, where there was ample room.

Our DBCR kids didn’t stay there long, as nothing much was happening except a few speeches closer to the Court.  Eventually Fr. Dieunel and I were left with one junior girl, and after about half an hour we left, doing thru the Capitol grounds because hordes of marchers were still coming up Constitution Ave. as far as we could see.  Amazing!  Wonderful!

Our students seem to have enjoyed the whole day’s experience, as long as it was.  The best part was the presence of thousands of young people–high school and college kids–taking part, taking a stand in favor of human life from its beginnings.

Thanks to everyone who participated in the various events with Fr. Ángel and Fr. Hugo. END_OF_DOCUMENT_TOKEN_TO_BE_REPLACED

Thank you to everyone who helped with and prayed for this beautiful and historical visit! END_OF_DOCUMENT_TOKEN_TO_BE_REPLACED