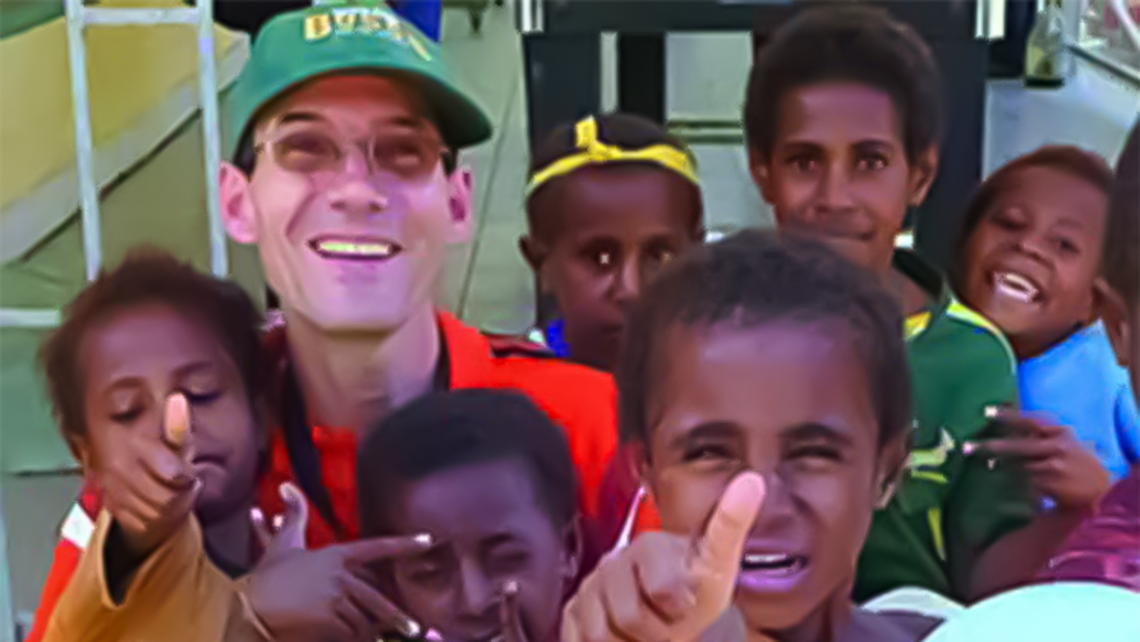 Reto Wanner, a 49-year-old mechanical engineer, is a lay Salesian missionary in Papua New Guinea. He was born in Switzerland to a Protestant Evangelical family. Eager to serve others, at the age of 30, he chose to work as a volunteer in New Guinea, spending three years in Port Moresby at the Don Bosco Technical Institute. During this time, he was very impressed by the work the Salesians do for the young. Upon returning to his family, he became a Catholic and entered the Salesian congregation in Germany. At the end of his novitiate, he made his first religious profession in 2006 in Italy and his perpetual vow in 2012. After a year, he asked to be a missionary and the Rector Major sent him again to the delegation of New Guinea.

When asked why he chose to be a missionary, Reto responded, “I believe it was a call from God, who wanted me to share my time and talents with the people of New Guinea. Two events in my childhood influenced me to become a missionary. The first was the example of my father, who worked as a foreman in Africa. His stories about the life of the African people fascinated me very much. The second event was this: when I was young, I had a serious accident at sea. While swimming, I was swept away by a strong sea current. The Lord gave me back my life, which for me was a sign that the Lord was calling me to some mission. This was also the moment when I woke up from a comfortable life within the family and lacking direction for my future. Not long after, I heard that the Salesians of New Guinea were searching for a mechanical instructor.  With a background in mechanical engineering, I applied. I left for Port Moresby, where I remained for three years. Living there and observing how the Salesians and Sisters were role models, I realized that it was not enough for me to share my engineering knowledge and professional skills. The young needed a deep formation that I couldn’t give them without a strong faith. This was the backbone that I needed to sustain in my work in this technological institute. I can clearly say that religion is what kept me in this wild and strange place. I believe the Lord called me to work as a lay Salesian missionary, and I am happy to have this vocation, entirely committed to the young in school, in the office, in the laboratory, and to be with them after school as well. Through this accompaniment, a climate of trust and love emerged. The youth opened up to me and were interested in my religious life. I have the opportunity to share true Christian values. I like being in contact with youth and young adults from villages near the Salesian house. I feel great joy sharing my life with children, especially during Sunday Oratory, which is filled with games, prayers, catechism, and many activities. The daily Eucharist, the Rosary, and “Good Night” talks are precious occasions to grow spiritually in faith. Prayers, working, and living in community are for me a great source of joy, comfort, and love.”

This article is based on "Reto Wanner: Da protestante a salesiano missionario," which was written by Ambrose Periera and featured in the April 2021 issue of Il Bollettino Salesiano. Click here to read the original story in Italian.

“Do all through love, nothing through constraint." END_OF_DOCUMENT_TOKEN_TO_BE_REPLACED

Due to the pandemic, the annual assembly was virtual. END_OF_DOCUMENT_TOKEN_TO_BE_REPLACED