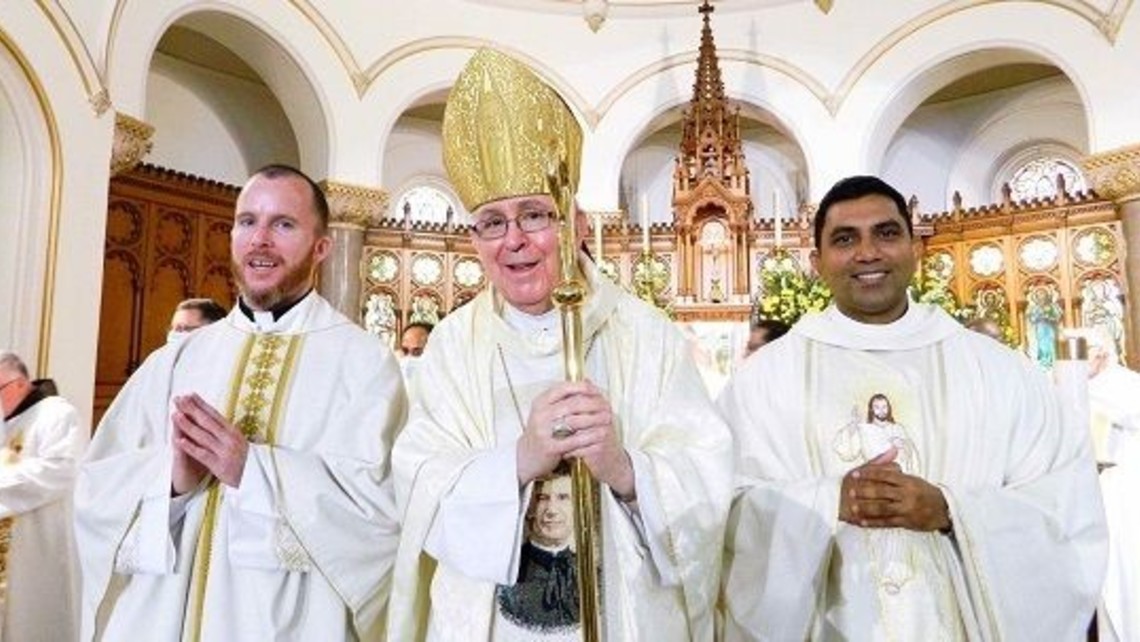 Frs. John Langan and Sasika Lokuhettige were ordained priests for the Salesian province of Canada and the Eastern United States on June 27.

Bishop O’Hara made two admissions: At the beginning of the liturgy, he confirmed his very great happiness at doing this service for the Salesians because he is a Salesian graduate—from Don Bosco Prep in Ramsey, NJ, in 1963. At the end, he confessed that these were his first ordinations since he was ordained bishop in 2014.

Bishop O’Hara also brought the good wishes and prayers of the archbishop of New York, Cardinal Timothy Dolan, a great admirer of the Salesians. Due to public health restrictions, admittance to the ordination Mass was limited, and the ample church was less than half full. About 40 priests concelebrated, mostly Salesians but also Franciscans from Father Langan’s home parish, St. Joseph in Winsted, CT, and other priest friends of the two ordinands.

Other members of the Salesian family attended: six brothers, two sisters, some local Cooperators, some pupils and past pupils from Don Bosco Prep, where Father Lokuhettige teaches, and from Salesian High School in New Rochelle, N.Y., and a good number of local parishioners, including the choir.

​Fr. Lokuhettige, 38, grew up in a devout Catholic family in a Salesian parish in Sri Lanka and pursued Salesian priesthood from his early years. After his ordination as a deacon in 2009, however, he hesitated to go on and left the Salesians for six years while continuing to discern. He returned in 2015 and was assigned to DBP as a candidate, renewed his vows in 2016, and was reinstated to the diaconate last year. “I am really grateful for Don Bosco Prep and for the Salesian province who welcomed me,” Fr. Lokuhettige said. “I felt so much at home the first day I stepped onto the Bosco campus. It was an environment of family, and of holiness and joy, and it really struck me.” ​At DBP he teaches theology and is involved in extracurriculars such as volleyball, Savio Club, and the school’s mission trips. His parents and sisters couldn’t travel from Sri Lanka, but an aunt, uncle, and cousins represented them at the ordination Mass.

Fr. Langan, 36, made a more roundabout vocational trip, eventually responding to God’s call after college at Northwestern Connecticut Community College and Eastern Connecticut State University, with the help of prayer, retreats, his parish youth group, and his pastor, Father Bruce Czapla, OFM. He became a Salesian candidate in 2009, teaching at Salesian HS, professed first vows in 2012 and perpetual vows in 2018, and did his practical training at Archbishop Shaw High School in Marrero, LA, as a theology and math teacher. His parents and extended family took part in the Mass.

In the coming year, Fr. Lokuhettige will continue to serve as campus minister at DBP, and Fr. Langan will have the same responsibility at Archbishop Shaw. ​

Bishop O’Hara began his ordination homily by reading from the ordination ritual, which emphasizes the dignity and responsibilities of priests. But he added personal remarks, starting with an observation about a photo of St. John Bosco. In the photo, the saint has a slight smile that, to the bishop’s mind, reveals his joy because he’s confident of Christ’s triumph over evil even in the turbulent era in which he lived. ​The bishop continued by reminding the ordinands that Don Bosco’s joy was based on the Eucharist and on Mary Help of Christians. “Surrender all your worries to the Lord in the Eucharist and to Mary Help of Christians,” he advised the priests-to-be. He added that daily Mass is what defines us as priests. “Make the Eucharist your joy and Mary Help of Christians your strength,” he said. At the end of Mass, Bishop O’Hara offered another thought, based on Don Bosco’s motto, Da mihi animas, caetera tolle: Don Bosco always saw everyone as having been redeemed by Jesus Christ, and Salesians and priests are steppingstones for people toward Jesus; we are bridge-builders. Finally, he reminded the congregation that the ship captained by Jesus will bring us through the rough seas of our time to safe harbor.

These experiences became foundational in developing the family spirit of the Salesian charism. END_OF_DOCUMENT_TOKEN_TO_BE_REPLACED