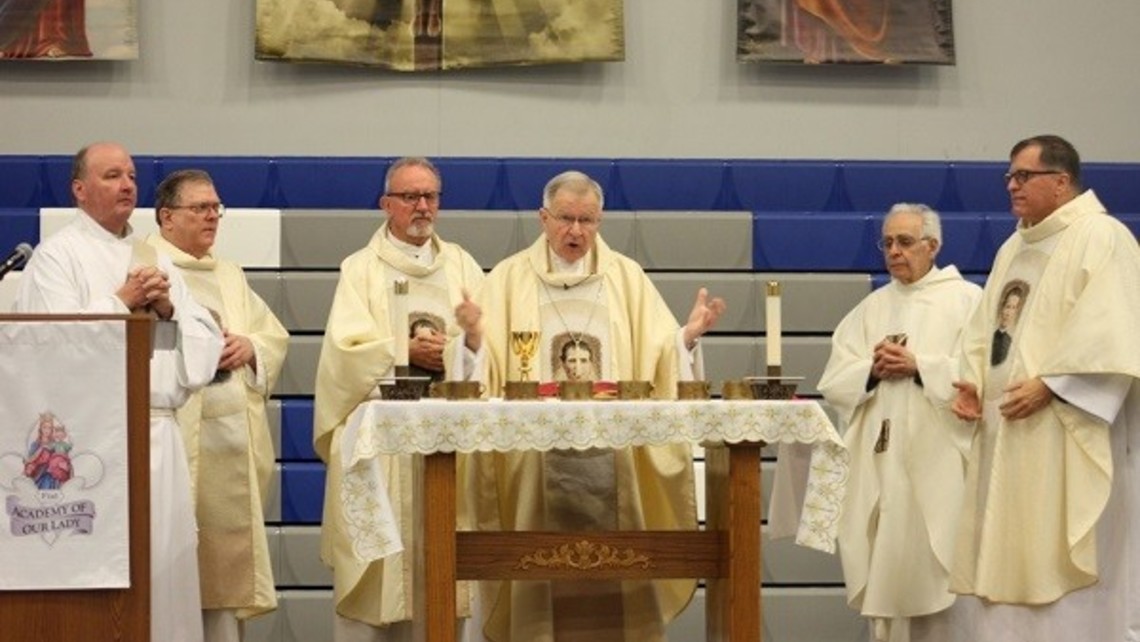 (Marrero, La. – April 15) – In the Salesian works on New Orleans’ West Bank, 2019 started with the presentation of Archbishop Shaw High School’s 2019-2023 five-year plan prepared by the Meitler Corporation. The previous five-year plan ended in December 2018. Rick Pendergast and Bro. Thomas Long, MS, spent the greater part of the second semester of 2018 meeting with various ASHS constituents to prepare this new five-year plan. A formal presentation was made to a representative group of administration, faculty, school board members, students, and school supporters in January 2019. A strategic planning implementation committee meets regularly with Fr. Lou Molinelli, school director-president, to address how the plan will become part of ASHS’s regular way of doing things.

The 25th Cajun COR retreat was held January 18-20. Fr. Steve Ryan, SDB, was able to join the retreat staff this year for the special 25th COR. The COR retreat is facilitated entirely by alumni and parents of present students. The participants are students from ASHS and the Academy of Our Lady. Participants come together for a weekend to focus on leadership and continued development of a spiritual relationship with God.

Also in January ASHS celebrated the annual Eaglemania spirit week with class competitions and lunchtime contests. The week culminated with the celebration of the solemnity of St. John Bosco with Archbishop Gregory Aymond. The celebration, lunch, and Battle of the Birds was hosted by Academy of Our Lady on their campus. In his homily the archbishop spoke about Don Bosco’s being a peacemaker. Upon reflection, we see a lot of wisdom in looking at the “wars” in our own lives, where they stem from, and how we can develop a heart like Don Bosco’s, which for the good of the young was peaceful even in the midst of great turmoil. This year the girls of AOL won the Battle of the Birds school trophy. The program for the day was organized by Ben Russo and the Shaw SGO members and Genia Roper and her leadership group from AOL. The week ended with Bro. Jerry Meegan escorting a group of students to the Catholic Schools Week Mass with Archbishop Aymond.

The big event in February was the extraordinary visitation of Fr. Timothy Ploch from Rome, representing the Rector Major. Fr. Tim started his visit to ASHS by celebrating the school Mass for the feast of the Chair of St. Peter. Fr. Tim spoke with each of the Salesian priests and brothers personally, visited the school, and met with Dr. Mark Williams, the school’s principal.

Fr. Tim also visited and celebrated weekend Masses at the Salesian parishes of St. Rosalie and St. John Bosco in Harvey and visited the three Salesian schools of Marrero and Harvey: the Salesian Sisters’ Academy of Our Lady and Immaculate Conception School, and St. Rosalie School. He met with the Salesian Cooperators. On February 25 he met with the local educational-pastoral council for their inaugural meeting and explained the purpose and intent of the EPC.

March 1 saw Bro. Meegan and teacher Chris Collins heading north with eight students for the March Salesian Leadership Retreat in Stony Point, N.Y. It was Mardi Gras in New Orleans, and the group was able to celebrate Mardi Gras in New York, followed by Ash Wednesday in the middle of the retreat. Aside from a terrific retreat experience, an added highlight in the week’s trip to New York was spending Sunday at St. Patrick’s Cathedral for Mass and then touring the city. This culminated with a terrific homemade Italian dinner with the Molinelli family in Mahwah, N.J. The leadership retreat participants returned to New Orleans on March 8.

Two weeks later Fr. Molinelli and Bro. Meegan headed north once again for the provincial chapter, March 18-22, followed by Province Day on Saturday, March 23. Back at school, the student body had a school Mass in honor of the solemnity of St. Joseph on March 19, at which Fr. Tom McGahee was the main celebrant.

March 26-27 were the days for the junior class retreats. The main presenter was Fr. Kurt Young, vocation director for the archdiocese of New Orleans. Fr. Young’s message was that the students should think about the wide variety of “vocations” confronting them as they prepare to become seniors and then high school graduates. The theme of the retreat was to identify their gifts and talents and the variety among the members of the class.