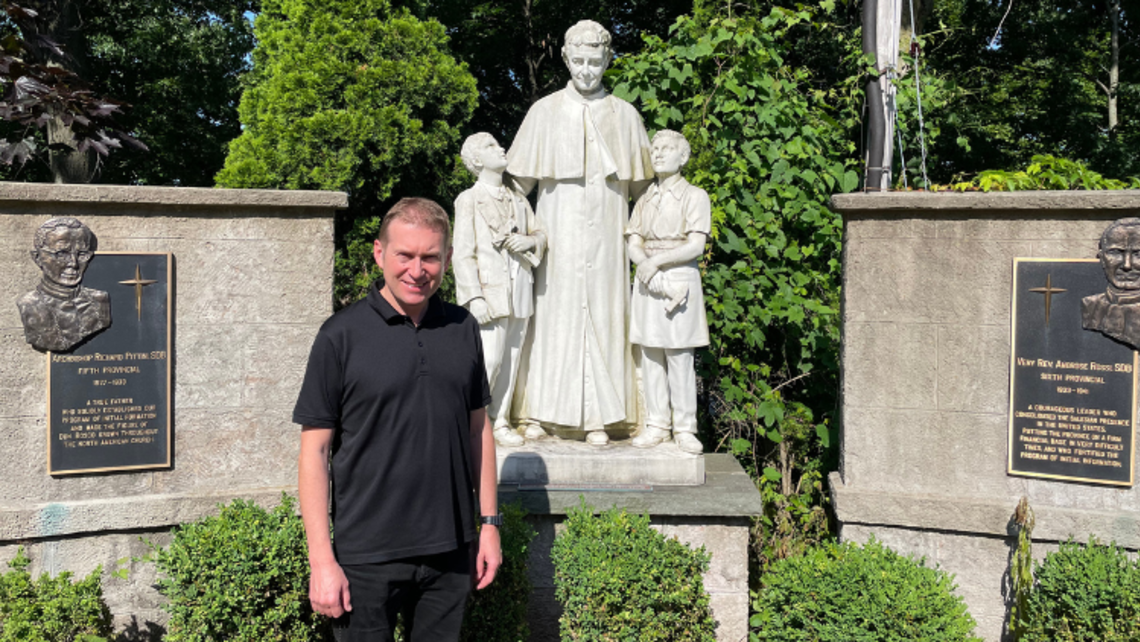 (New Rochelle, NY – June 16) – Fr. Marcin Kaznowski, SDB, the provincial of the Krakow Province (PLS), visited the SUE province from Tuesday, June 7 to Friday, June 17. The primary purpose of his coming to USA is to visit Salesians from the PLS province serving in the SUE province: Fr. Krzysztof Cepil, Fr. Tomasz Grzegorzewski, Fr. Zbigniew Majcher, and Fr. Andrzej Papiezs. He spent a few days with the Salesians in Chicago, IL; Cherry Hill, NJ; and Woodbridge, NJ. For much of the visit, he will stay in the provincial house, and from there go to Port Chester, Salesian Missions, and other Salesian communities. While in New Rochelle, Fr. Marcin talked about the Salesians from the PLS province working in Ukraine and how the Salesian works in Poland have adapted because of the war in Ukraine.

Fr. Marcin noted there are five Salesian communities in Ukraine which belong to the PLS province: two communities close to Lviv, two communities close to Kyiv, and one close to Odessa. This is in addition to the Salesian works of the Ukrainian vice-province. At the beginning of the war, like the rest of the world, the Salesians in Ukraine and Poland felt shock, fear, and confusion. When the war broke out, the SDBs in Ukraine were together for a day of recollection. Fr. Marcin was able to have an online meeting with them, admiring their dedication when they all decided to stay in Ukraine, without knowing what would lie ahead.

The response of the Salesians from the Krakow province after the war began can be grouped around three efforts. There has been concerted effort from the beginning to provide immediate humanitarian aid to those in the Salesian presences in Ukraine and their neighborhoods. This meant transporting food, clothing, medical supplies, generators, etc. to the Salesian centers, which became hubs for distribution to families and other nearby centers. Some of the larger spaces, like the churches, have become warehouses, storing supplies until they can get into the hands of those in need. A second response has been to continue the education for the students in the Salesian schools. This meant getting the students and teachers computers and other school supplies so they could have distance learning. Some students and teachers moved out of the country but were able to stay connected to classes because of this effort. Classes are almost finished for the year, and there will be a shift to summer camps. The third response has been to receive refugees in Poland. Most people fleeing the war in Ukraine are women and children. For the most part, they have been welcomed in family homes, as well as religious communities, parishes, or other social service centers, not in refugee camps. The Salesian provincial center currently has 16 guests living with them. This third response means providing food, clothes, counseling, job training and placement, childcare, recreation, etc.

Fr. Marcin related that for the first few weeks of the war, there was some confusion about how to respond, how to fund the services, and how to and with whom to communicate. The Salesian mission office of Warsaw has been tasked with coordinating the distribution of most of the funds. He recognizes that there has been a tremendous outpouring of generosity from the Salesian world, including Canada and the USA, to support the response of the Salesians. The Polish government has been able to help with some funds, but this will stop in July.

As the war drags on, some of the strong emotion has subsided and, in some ways, people in western Ukraine and Poland have adjusted to a new life. Some refugees have returned to Ukraine, especially if they lived in the western part of the country. The larger urban areas in Poland are at capacity for providing social services, and new arrivals are being taken to smaller cities and towns. Some living in Poland have found work, although Fr. Marcin admits it is not easy for the women from Ukraine to find work that supports their family. There are an estimated 300,000 school-age children from Ukraine who have settled in Poland. They are being given classes in Polish language, so they can better integrate into the school system in September. The seven schools in the Krakow province are preparing for this inclusion of the students from Ukraine. Although no one knows for sure, this crisis could last for a long time.

For the most part, Fr. Marcin is able to maintain regular communication with the Salesians in Ukraine through the internet. A few weeks ago, he met in person with the Salesians near Lviv. They continue their dedicated, self- sacrificing service. More than 20 tons of humanitarian assistance has been sent just from PLS, helping families who are faced with high prices and scarcity of items. Fr. Marcin comments that each person’s story is unique in this tragedy. Some cross into Poland because their homes have been destroyed, others are returning to Ukraine to keep the family together. In the midst of the sorrow, goodness shines through, in the attitude of welcome from so many people, in the Salesians playing with the children in the provincial house, in the generosity of people from around the world.

To learn more about the response of the Salesians during this time of war, see the short videos on Salesian Missions' YouTube.

Contributions can still be made through Don Bosco Mission Office, Montréal, and Salesian Missions, New Rochelle.

Communication is to channel messages from above and honor inspiration every time. END_OF_DOCUMENT_TOKEN_TO_BE_REPLACED

To Be Joyfully Revived by the Spirit

Here is what two Salesian Sisters and two lay colleagues had to share. END_OF_DOCUMENT_TOKEN_TO_BE_REPLACED

Don Bosco the Catechist: The Salvation of Souls

All we do is for the salvation of souls. END_OF_DOCUMENT_TOKEN_TO_BE_REPLACED