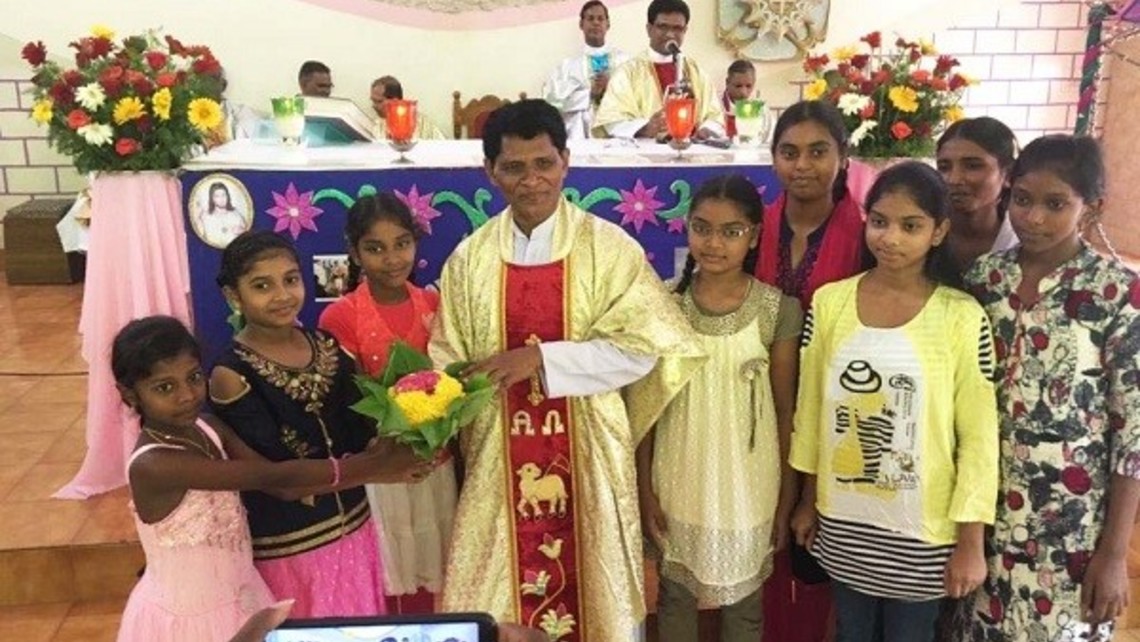 (ANS – Ravulapalem, India – October 30) – On Sunday, October 7, after 32 years of continuous service for the cause of disadvantaged people, Fr. Thomas Pallithanam was given a tearful yet joyful send off at Ravulapalem, Andhra Pradesh State. Already active for more than a year as Salesian representative at the United Nations, Fr. Pallithanam has now left the NGO PARA, which he founded and which led him to collaborate with major international organizations. The send-off was combined with the golden jubilee celebrations of his religious profession as a Salesian.

The worst floods in living memory in Konaseema, the delta of the mighty Godavari River in August 1986, brought a volunteer group of young Salesians to Ravulapalem, the gateway of Konaseema. Among them was Fr. Pallithanam, who was permanently transferred there in 1987. He continued to work from Ravulapalem until now.

Seeing that the poor, especially those of scheduled caste origin who constitute more than 30% of Konaseema, were the most affected, Fr. Pallithanam initiated People’s Action for Rural Awakening, popularly known as PARA. Its aim was to find a more lasting solution to people affected by disasters, natural as well as of human origin. It would not be an exaggeration to say that the works of PARA increasingly embraced victims of human-caused disasters. His involvement led to his being arrested and lawsuits being brought on him.

Following a human rights and participatory approach, PARA’s activities gradually moved from immediate relief to addressing the prevalent discrimination and oppression. Human rights violations such as atrocities on Dalits (“untouchables”) and women, non-payment of adequate wages, forced alienation of land, abuse, violence, and sexual harassment were addressed significantly. People can vouch for a significant reduction of atrocities and growth in respect for and appreciation of Dalits in the Konaseema region.

Following a rights-based approach, the activities of PARA have coalesced into a comprehensive approach to social transformation by promoting the empowerment and participation of the most disadvantaged people. Cultural action along with human rights education was taken up as part of a new socialization of the young. At present there are over 600 schools and 43,000 children who are participating in human rights education and are members of over 1,000 human rights clubs.

Over the last 32 years, PARA has continued its work through various institutional setups like the Ekalavya Training Centre (empowerment, advocacy, documentation), Ekalavya Children’s Home (care and protection of children at risk), Surakshita (home for girls and women in distress), the District Childline 1098 available to children in need night and day, and informal structures like the Child Friendly Cities Initiative – Rajahmundry.

An inclusive approach leading to the active participation in the decision-making process of every stakeholder, be they children, women, or people with disabilities, has been the noteworthy characteristic of each of these undertakings. Fr. Pallithanam was also the moving force behind a network of organizations working for the rights of the unorganized rural poor. He was also the national coordinator of the “Wada na todo abhiyan” as part of the Millennium Development Goals 2015, which today is pursued through the implementation of the Sustainable Development Goals 2030.

As a person always concerned about others, he was in for a huge surprise on October 7. During Mass there was a natural outpouring of joy of a people, especially those who were helped as children who now have children of their own, to thank him for being part of their lives. More than a round of praise and exaltation, it was a joyful recollection of the work and service of a life lived 50 years for others, especially the young. Later in the day all the PARA staff, past and present, came together spontaneously to express their joy for Fr. Pallithanam’s jubilee, and grief at the loss of their mentor and leader because of his transfer to New York. The scene was emotional, with the participants sharing their moments of life and work, learning and sharing, during the past 32 years. This was also a time of expressing gratitude and reconciliation, and various emotions not expressed sufficiently until now.

October 6 and 8 saw the gathering together of knowledge leaders from different professions who collaborated with Fr. Pallithanam as friends and as members of state advisory committees of Andhra Pradesh and Telangana on human rights education. This was an occasion to introduce the new PARA team to these professional friends. They in turn gave assurance of continued advocacy with the governments and civil society organizations for carrying forward the mission of PARA for a new socialization through human rights education and human rights clubs.

Fr. Pallithanam took off on October 8 for New York, where he represents the Salesians of Don Bosco at the U.N. For him, the task remains the same; the location and scale are new!

There will be a video released each day of the novena. END_OF_DOCUMENT_TOKEN_TO_BE_REPLACED

This free event is open to everyone! END_OF_DOCUMENT_TOKEN_TO_BE_REPLACED

Thus, we can continue the historical and spiritual journey. END_OF_DOCUMENT_TOKEN_TO_BE_REPLACED