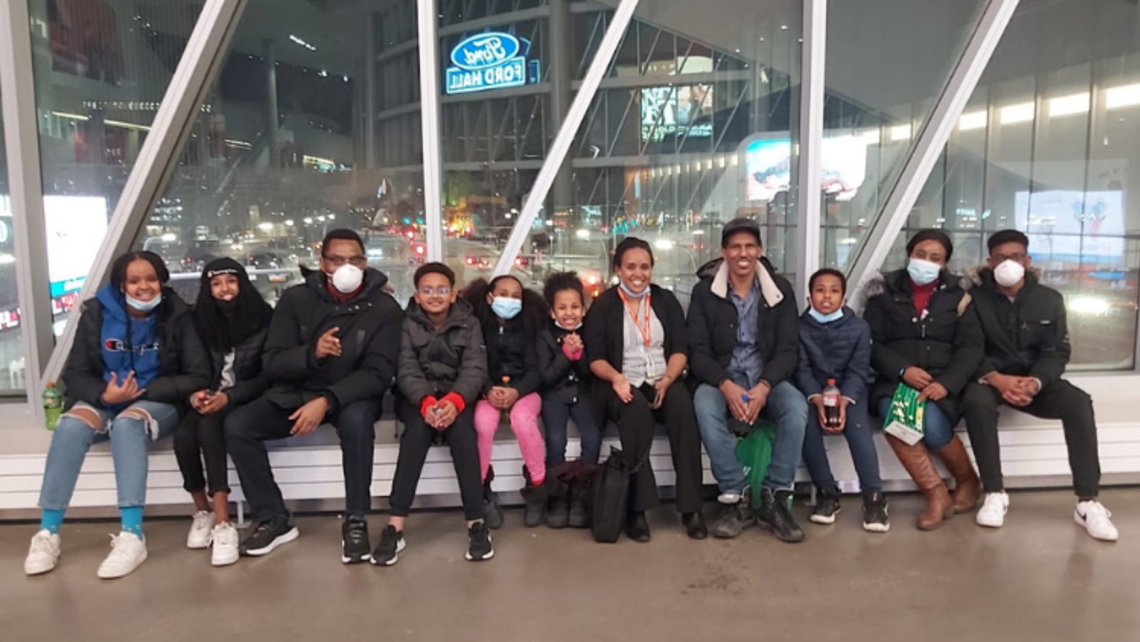 The main attraction for the night was a hockey game between Edmonton Oil Kings and Calgary Hitmen. Thirty-five people (including youth, parents, and volunteers) from the parish showed up for this light but meaningful moment, which is also part of the Faith and Fun program.

Faith and Fun Night was a chance for the whole family to have quality time together outside their homes and watch the hockey game. The night of entertainment turned out to be an unforgettable experience for all in attendance.

It was a unique experience for the parish’s children, most of whom were there in an indoor stadium for the first time. They truly enjoyed the evening, especially as they saw the huge crowd and joined them in cheering the players. In fact, Wadik, who is six years, said, “I felt so good being there.” His sister Diyana, who is nine, exclaimed that she “felt awesome and happy all through the game.” Solyana, who was overwhelmed with excitement, later wrote that “in the hockey game [she] enjoyed seeing [her] Oil Kings for the first time. It was so very nice to see so many friendly faces, too. [She] really enjoyed sharing and eating snacks with other kids.”

Another youth, Danielle, added that she “enjoyed watching the hockey match with [her] friends; the better Oil Kings played, the more popcorn we were given. The result was predictable—the Oil Kings won by beating the Hitmen by seven points."

Two other children from grade nine (Divine and Alex) were unanimous in saying that "Faith and Fun Night at Rogers Place was really fun. First, it brought [them] together. Secondly, [they] shared not only moments of joy but also learned how the players played. We are now even more convinced that to succeed in any walk of life, interest, dedication, hard work, team spirit and following the rules are fundamental. Last, we realized that failure must never be a sign of discouragement but rather serve as a stepping to success."

All the children who came in for this evening's match want to return. This occasion clearly tells us that children need both the elements of faith and moments of socialization and fun for their holistic growth. Overall, it was indeed a “faith and fun” experience for St. Dominic Savio Parish’s children.

Thanks to everyone who participated in the various events with Fr. Ángel and Fr. Hugo. END_OF_DOCUMENT_TOKEN_TO_BE_REPLACED

Thank you to everyone who helped with and prayed for this beautiful and historical visit! END_OF_DOCUMENT_TOKEN_TO_BE_REPLACED