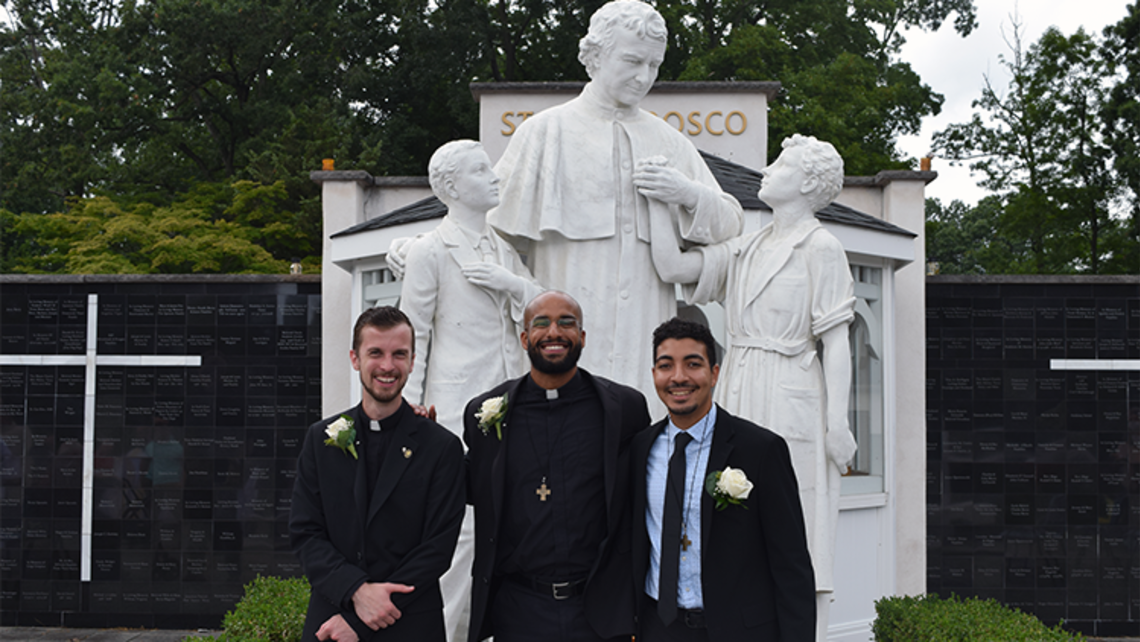 Fr. Tim Zak received their vows. About 100 people took part in the Mass of Religious Profession, including 49 Salesian priests and brothers, a few other members of the Salesian Family, almost 20 members of the brothers’ families, including Deacon Mark Sciullo, father of Br. Josh, seven Salesian Lay Missioners, and other friends of the professing brothers. Also present were six Boy Scouts from Croton-on-Hudson involved in the Ad Altare Dei religious emblem program.

All three brothers completed two years of practical training in a Salesian apostolate. Then Brs. Branden and Josh began theological studies that will lead to priestly ordination in two years (God willing). Br. Rafi is a coadjutor, and this profession completes his period of initial formation.

Br. Branden Jermaine Gordon is the older of Ronald Gordon and Rita Pipito’s two sons. He was born in Toronto, ON in 1987. His parents were unable to attend the professions, due to Covid restrictions.

Branden met the Salesians while he was in high school. A conversation with Fr. Frank Kelly of St. Benedict Parish in Etobicoke, ON, led Branden to further spiritual seeking and an eventual return to religious practice. Fr. Frank’s “unflagging cheerfulness and personal warmth” was backed up by the example of other Salesians in the parish, particularly Fr. Mike Pace, Fr. John Puntino, and Br. Bernie Dubé. He got involved in the parish’s youth ministry and developed a relationship with God.

After high school and university, Branden worked for Toronto Parks and Recreation for nearly ten years, then became a teacher. His parents had already inspired in him a concern for young people. This, together with an interest in religious life, induced him to consider becoming a Salesian.

Branden became a Salesian candidate in the Etobicoke community in April 2013, where he was guided by Fr. Puntino, director of the community. As they studied together Don Bosco’s Memoirs of the Oratory, Fr. Puntino convinced him “that there was something special about the Salesian charism.” At the beginning of 2014, he began prenovitiate at Holy Rosary Parish in Port Chester; he was a novice in Rosemead, CA, in 2014-2015 and made his first profession of vows on August 16, 2015, in Port Chester, NY.

During two further years of formation in Orange, NJ, he was influenced by Bro. Tom Dion as a formator and spiritual director. He did his practical training at Salesian High in New Rochelle from 2017 to 2019, teaching religion to freshmen. In 2019, he returned to the Orange community and began theology studies at Immaculate Conception Seminary in South Orange. He has spent his summers back in Canada brushing up on his French, which he admits has been a challenge for him.

His apostolic work in Orange has included helping with RCIA and other catechetical programs as well as some dramatic presentations at Our Lady of the Valley Church in Orange. This summer he assisted with the Bosco Bicycle program conducted by Seminaire Salesien in Sherbrooke, QC, which takes teen students on tours of the Canadian Eastern Townships region.

The best part of Br. Branden’s initial formation thus far were his postnovitate years in Orange (2015-2017): “I enjoyed the brotherhood that I experienced with my novitiate companions. The fraternal spirit among us overflowed into our ministry to the young. I especially enjoyed our Friday nights at the Our Lady of the Valley youth center.”

He aspires in the next few years “to become a better brother in community—more understanding, more compassionate, and more open-hearted toward the confreres,” and to “become a better preacher as I prepare for ordination.”

Eventually, Br. Branden would like to learn more about St. Francis de Sales and become a specialist in de Sales studies like Fr. Joe Boenzi of Berkeley and the UPS in Rome.

Br. Joshua Christian Sciullo was born in Jacksonville, FL, in 1993, the last of Mark and Jody Sciullo’s four children. They belonged to Immaculate Conception Parish there, but Deacon Mark and Mrs. Sciullo are now members of Most Holy Redeemer Parish in Jacksonville.

Joshua found the Salesians through an online search, prodded also by his father and sister. The priests and brothers of the Servants of the Home of the Mother religious congregation also influenced his vocational discernment. “The environment and relatability of the first Salesians” he met clinched his decision to enter Salesian formation at Orange in July 2011. He advanced to the prenovitiate at Holy Rosary in Port Chester in 2013-2014 and thence to the novitiate in Rosemead in 2014-2015. He made his first profession on August 16, 2015, at Port Chester.

Br. Joshua had two years of postnovitiate formation in Orange, then went to Archbishop Shaw High School in Marrero, La., for practical training (2017-2019). He taught freshman and sophomore religion. Since the fall of 2019, he has been studying theology at the Ratisbonne Institute in Jerusalem (an affiliate of the UPS). This summer he was assigned to day camp at Mary Help of Christians Center in Tampa, FL.

The best part of his postnovitiate years has been the brotherhood he has experienced in his Salesian communities and what he has learned in them. After his perpetual profession, he hopes to continue “growing closer to the heart of Christ.” He looks forward to more young adult ministry, accompanying them toward Christ.

Br. Rafael Ramon Vargas, the middle child of Rafael and Carmen Vargas, is a native of Paterson, NJ, where he was born in 1992. He has an older brother and a younger sister. They were raised in neighboring Fair Lawn, where his parents now attend St. Anne Church.

Rafael got to know the Salesians well as a student at Don Bosco Prep in Ramsey—“immersed in the Salesian charism,” family spirit, and “visible dedication of the Salesians and faculty.” Especially influential were Fr. Lou Molinelli, the director, and Fr. Jay Horan, campus minister.

He entered Salesian formation as a candidate in Orange in August 2010, continued into prenovitiate in Port Chester in 2012-2013, and made his novitiate in Rosemead in 2013-2014. He made his first profession as a coadjutor brother at Haverstraw on August 16, 2014. Returning to the formation community in Orange, he attended Seton Hall University to finish a B.A. in Catholic Studies with a minor in Spanish.

From 2016 to 2018, he did practical training at Archbishop Shaw in Marrero, teaching religion to eighth-graders and juniors, coaching cross country, leading Scripture study, and moderating a breakdancing group.

In 2019, he went to Guatemala for specialized formation for Salesian brothers, returning to Marrero this year. He ministered in summer camp there before moving to a new assignment in Orange; now he is preparing for service as a formation guide for the young Salesians there.

For Br. Rafi, the best part of his postnovitiate period was “the opportunity to spend two years leading and animating the youth group” at Our Lady of the Valley Parish in Orange. “It was also a blessing to return to Shaw after being away for two years [in Guatemala] and see the growth in the young.”

In Orange this year, he will begin a Master’s program in social work at Seton Hall, hoping for a better understanding of the young people in the province’s works and of how to collaborate with the lay people in those works.

Fr. Tim began his homily at the Profession Mass by recalling Pope Francis’s extraordinary prayer service on March 27, 2020, invoking God’s help against the Covid pandemic. The Holy Father read Mark 4:35-41, Jesus’ calming of the storm on the Sea of Galilee, and then commented upon it. The Pope said that we are all in the same boat, and we will all survive by working together.

Fr. Tim told the congregation that the Pope’s words speak to every age. These three Salesians are making a radical commitment to working for others. Then he cited the day’s second reading, Rom. 12:1-13, in which St. Paul admonishes the early Christians to be concerned for one another. He asked what Paul’s words mean for Bros. Branden, Joshua, and Rafael.

The preacher explained that St. Paul was teaching a different way of obeying God’s commandments, a new covenantal relationship (cf. the first reading, Jer. 31:31-37) based on Jesus Christ and his new law of love. How do Christians function in this new law? He explained that St. Paul was concerned that they act freely and make daily decisions that reflect their faith.

Fr. Tim continued: Christians need each other; no one can follow Christ by himself. These three brothers are offering their lives entirely to God by giving themselves to others, offering their living bodies, as St. Paul says, sacrificially. They will need the help of their Salesian confreres and others to do so.

They make their self-giving, Fr. Tim went on, as a response to God’s gifts to them, starting with the covenant that he made with them (and with all of us) in Baptism. We are all in the same boat of the Church together and depend upon one another in union with Christ.

After Mass, a buffet lunch was served in Lee Hall across the road from the chapel.

These experiences became foundational in developing the family spirit of the Salesian charism. END_OF_DOCUMENT_TOKEN_TO_BE_REPLACED