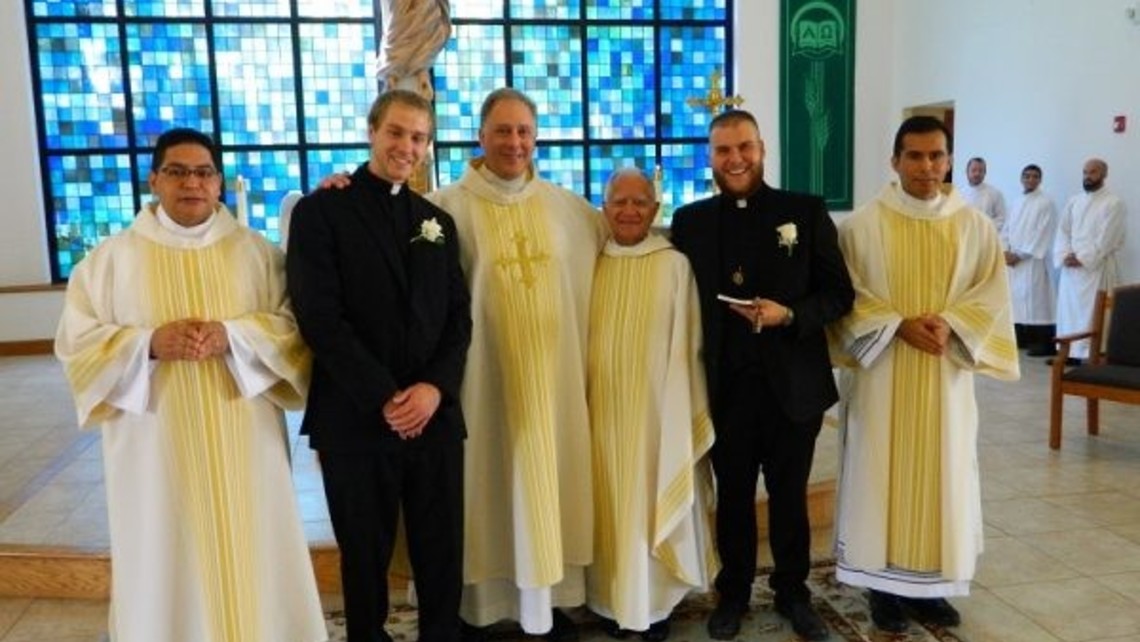 The two new brothers pronounced their vows before Fr. Tim Zak, provincial, during a Mass celebrated in the Marian Shrine chapel at Haverstraw-Stony Point. An intimate Salesian gathering of 35 concelebrants (including two priests from Philadelphia, friends of Bro. Dan), 2 deacons, 12 coadjutor brothers, 8 clerics, our 2 prenovices, 9 Salesian Lay Missioners, and numerous family members and friends of Bros. Dan and Tom assisted in the celebration.

Most of the Salesians taking part were on retreat, which Bros. Dan and Tom shared for the last few days of their novitiate, accompanied by their master of novices, Fr. Tom Juarez of the San Francisco Province. They had made their novitiate in Richmond, Calif., under the guidance of Fr. Tom Juarez and of Fr. John Puntino as socius.

Bro. Dan and Fr. Tom are the first newly professed in the New Rochelle Province since 2015.

Bro. Dan was born in 1988, the son of David and Maryann Glass. He has an older brother, Nicholas, and a younger sister, Katherine. He was raised in Malvern, Pa., where the family are members of St. Patrick Parish.

Bro. Dan states that his pastor in Malvern greatly influenced his vocation. “Fr. Chris Redcay’s dedication to serving the parish and his love for the parishioners was a beautiful example of what it means to be a pastor, to be devoted to Christ and the service of our brothers and sisters.”

Continued discernment after his return from South Sudan led Dan to apply to the Salesian candidacy program in Orange, N.J. He was accepted and entered in August 2015.

He says: “At first it was the apostolate that attracted me to the Salesians. I loved the missionary focus and my time in South Sudan. I also loved working with young people while I was the director of religious education at St. Patrick Parish.

“As I continued to learn what it means to be a Salesian and what the spirit of a Salesian is, in addition to the apostolate, it was the joy, loving kindness, and prayer life that continued to inspire me.”

The novitiate in Richmond is adjacent to Salesian College Preparatory High School. So, in addition to doing what novices do—learning to pray, studying the Constitutions, living the vows, etc.—he found tremendous joy in “spending time with the students and feeling at home in the school environment. In a year that gave me extra time to pray and explore the Salesian Constitutions, it was a huge blessing to have Salesian College Prep next door to help me see the spirit and joy of the Constitutions come alive. With the students present each day, we were able to see everything that we had been learning come to life.”

Bro. Dan is thinking of eventually returning to the foreign missions. He says, “It is my hope to appeal to the Rector Major as a missionary to the nations; to help build the Salesian Congregation where it is in most need, to bring the Gospel and to serve the young and the poor who are most vulnerable and in need.”

Bro. Tom is the youngest son of Mitch and Margie Junis. He was born in Bloomington, Ill., in 1992. He has two older brothers, James and Charles. The family are members of Holy Trinity Catholic Church in Bloomington.

Bro. Tom earned a degree in early childhood education from Illinois State University in Bloomington before becoming a Salesian candidate at Orange on January 1, 2016. His education studies had already led him to St. John Bosco, whom he took as a patron for his educational efforts. He read about the saint’s life and his educational method and tried to put the latter into practice. In college, he says, “I really found my passion for working with young people and finding God in them and wanting to give my life to God.”

While Tom was attending ISU, the religious sisters at the campus Newman Center gave him an example of joyfully living out their religious consecration, which inspired his own growth in his Catholic faith and suggested to him the possibility of a religious vocation. They accompanied him closely and helped him find his vocation to religious life.

Further, the sisters urged Tom to contact the Salesians at the University of Illinois Newman Center in Champaign. He did so and started meeting monthly with Fr. Bill Bucciferro to learn more about Don Bosco and the Salesians. Fr. Bill encouraged him to go on a Salesian pilgrimage to Turin in 2015 marking the bicentennial of Don Bosco’s birth as part of his discernment. “That pilgrimage had a huge impact on me,” he recalls.

Drawn by Don Bosco’s spirit, he asked the saint of the young to pray for him and, if it was God’s will for him to become one of Don Bosco’s sons, to bring that about. During the bicentennial pilgrimage, on Don Bosco’s 200th birthday Tom was in the Basilica of Mary Help of Christians, “praying for the courage to accept God’s call and offer my life to God and the young, and to know whether I was called to do so as a Salesian.” When the pilgrims landed back in New York, he received the call that he’d been accepted into formation. He saw this “as a sign of Don Bosco’s intercession and an indication that he was truly called to be a son of Don Bosco, a Salesian.”

For Bro. Tom “the best part of novitiate was accompanying the students [of Salesian College Prep] when we had free time and really finding God in them and trying to be a sign of God’s love to them, and the friendships made with them.”

Eventually, he says, “I would like to work at a boys and girls club or youth center to be able to use my gift of working with younger kids and use what I learned from my Early Childhood Education degree. I would also love to specialize in college campus ministry; it was something I enjoyed during my time in college, and I know our Salesian charism would bear great fruit in a college setting in helping students discern their vocation.”

Bro. Tom is grateful “for the loving support of my family, especially my mom and dad, for the many people who have accompanied me throughout my life, and especially for those who have been praying for me during this time of formation.” He also found a strong Salesian influence in the late Msgr. Greg Ketcham, a Cooperator who directed the Newman Center in Champaign and then became pastor of St. Patrick’s in Bloomington.

Fr. Tim Zak’s homily pointed to Don Bosco’s encounter with Bartholomew Garelli as a key moment in his discernment of his life’s project of making service to the poorest young people his apostolic passion. The lessons that John Bosco learned from his mother—God’s presence all around him in nature and in daily life—and his training at the Convitto Ecclesiastico in how to be a priest assisted him in this discernment of what God was asking of him.

Fr. Tim said: “As it was for Don Bosco, so it is for us and the young today. God calls each of us, with all the specificity and peculiarities of our lives. This is an action of God’s grace, to which we respond with our gifts and our limitations.”    As indicated in the first reading of the Mass (from Isaiah 44), Fr. Tim continued, God calls Israel and us with a personal love; he calls us to be his “darlings” and to convey his love also to others who “are waiting for the announcement of the Good News, for someone to share with them the living water [of the Holy Spirit]. Our vocation is oriented toward mission. We don’t live for ourselves. . . . God’s love is to be shared with them also.”

This is the vocation of Bro. Dan and Bro. Tom and of every Salesian, as it was Don Bosco’s.

There will be a video released each day of the novena. END_OF_DOCUMENT_TOKEN_TO_BE_REPLACED

This free event is open to everyone! END_OF_DOCUMENT_TOKEN_TO_BE_REPLACED

Thus, we can continue the historical and spiritual journey. END_OF_DOCUMENT_TOKEN_TO_BE_REPLACED