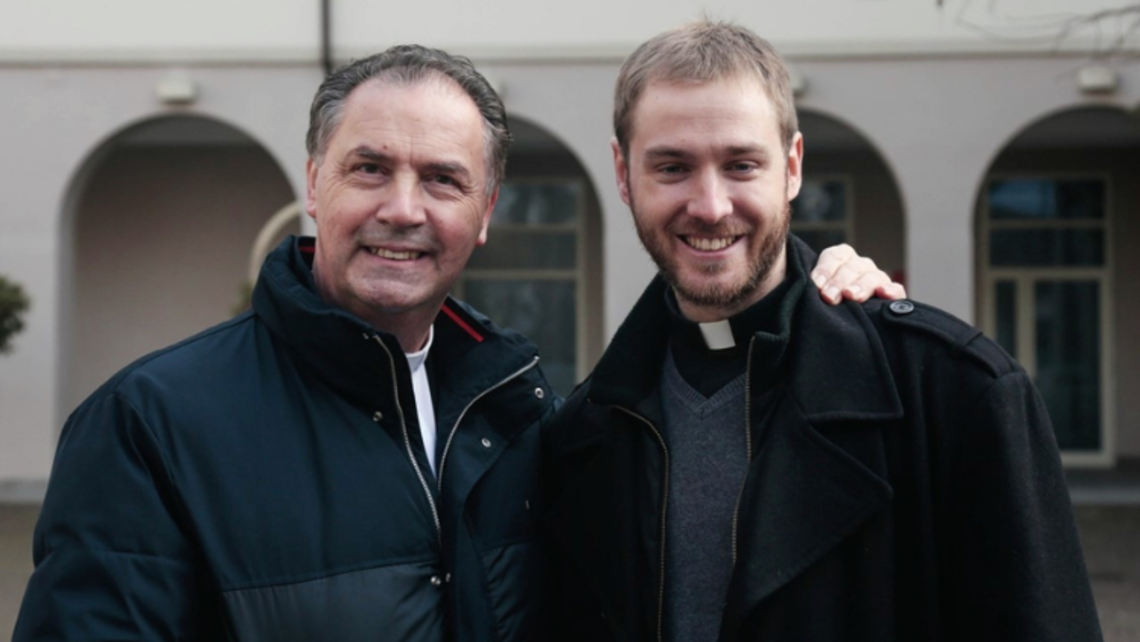 On Sunday, December 19, 2021, Br. Dan Glass received a missionary blessing from Fr. Dominic Tran and the community of Orange, representing all the confreres of our province showing our support for Br. Dan’s missionary vocation. After spending Christmas with his family and a few days in New Rochelle, I took him to the airport on Tuesday, December 28. He arrived in the Democratic Republic of Congo the next day. I thank Br. Dan for his witness to the missionary dimension of the Salesian charism and for responding to the particular call to be a Salesian missionary ad gentes. I also thank the formators and confreres who have accompanied Br. Dan on this vocational journey.

The same weekend that Br. Dan received his blessing as a missionary, the Rector Major published his Appeal for Missionaries 2022. He makes this historical observation: Bl. Pius IX approved the Constitutions of the Society of St. Francis de Sales on April 3, 1874; the Congregation of Bishops and Regulars issued the corresponding decree 10 days later. Then on November 11, 1875, Don Bosco sent out the first missionary expedition. Just a year and a half year after the approval of the Constitutions, Salesian missionaries were sent to Argentina. We can see that, for Don Bosco, apostolic zeal and missionary commitment are essential elements of the Salesian charism. As it was in the time of Don Bosco, so it is today. We really can’t be Salesian religious without the apostolic zeal and missionary spirit that we find in the young men who founded the Salesian Society with Don Bosco and readily left their homeland to educate and evangelize the young.

Back in June, I asked all the directors to incorporate the letter, "The Salesian Missionary Vocation: reflections, processes and operational guidelines," by Fr. Alfred Maravilla, general councilor for the missions into the SDB community’s ongoing formation plan. We can read this letter, not in a general way, but in a very personal one, as we think of Br. Dan and other missionaries who have been sent from our province, along with those who have come to the SUE Province. As brothers, let’s express our gratitude and support to them. The contact information for confreres from our province now serving as Salesian missionaries ad gentes is in the Salesian Directory. Br. Dan’s contact information there is the same as when he was in our province. To further support the missionary thrust of the Salesian presences in our province, Adam Rudin now works out of an office in the Salesian Provincial House close to other colleagues in the youth ministry department. Additionally, Fr. Sean McEwen, province delegate for mission animation, will include a monthly message in Salesian News. I ask all Salesian presences to look ahead to October, World Mission Month, and begin to consider what they will do. The resources from the Congregation’s mission department will be helpful in this initiative.

We are in the midst of the St. John Bosco Novena and reflect on the encounters people had with Don Bosco and how their lives were changed because they met a man of God. “Reviving the gift we have received,” we recognize the extraordinary value of the relationships we have with collaborators, members of the Salesian Family, and young adults. Our witness to the Salesian missionary spirit can spark in them a burning desire to serve the Lord, maybe even as missionaries.

Please remember that, according to Regulation 76, each Salesian priest will say Mass on Tuesday, February 1 for our deceased confreres.

I conclude with the invitation of Fr. Angel: "I invite you, dear confreres, to make a careful discernment to understand whether the Lord is calling you to put yourselves at the disposal of the Rector Major, anywhere in the world, for the mission ad gentes, ad exteros, which implies a lifelong commitment."

Happy Feast of St. John Bosco to you all!

Thanks to everyone who participated in the various events with Fr. Ángel and Fr. Hugo. END_OF_DOCUMENT_TOKEN_TO_BE_REPLACED

Thank you to everyone who helped with and prayed for this beautiful and historical visit! END_OF_DOCUMENT_TOKEN_TO_BE_REPLACED