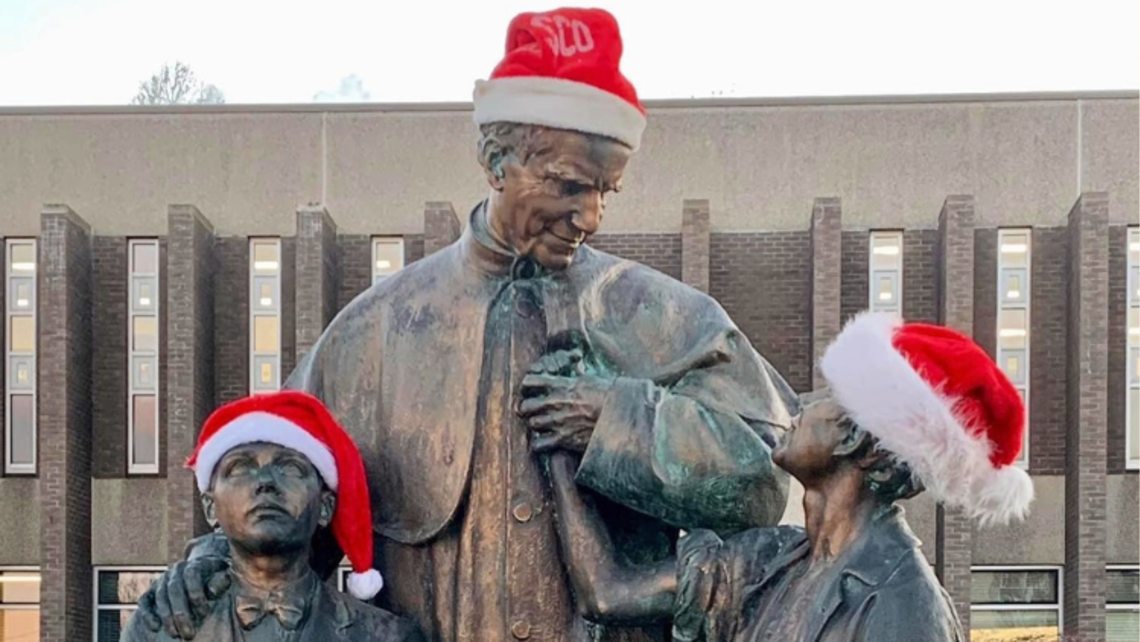 While the Rector Major was with us in the SUO and SUE Provinces (SUO and SUE), he commented a few times that the image he had of young people in Canada and the USA was influenced by the media, especially movies. Young people were often presented as unruly, disruptive, rebellious, or apathetic. He was happy to find the youth in our Salesian presences respectful, attentive, enjoying strong friendships, enthusiastic, and having life goals. He remarked that although the media is produced in Canada and the USA, it doesn’t reflect the reality of the youth in our Salesian presences.

On several occasions, Fr. Ángel was able to meet groups of about 15 young people. He often asked them about their family backgrounds, why they chose a Salesian school, and what studies or careers they were working toward. Most of the students spoke of their families struggling with poverty, immigration, unemployment, etc. A Salesian education gave them a path to achieve their life goals, help their families, and make the world a better place. Some of the students want to be medical doctors, lawyers, engineers, architects, psychologists, teachers, social workers, political leaders, and business owners. One even wants to be a philosopher. The Rector Major was surprised that at least three young men said they wanted to be Salesians of Don Bosco like Salesians in their schools. Besides the frank sincerity of the young men and the identification of specific SDBs who are their inspiration, Fr. Ángel was surprised by the support they received from their peers. After the meetings, he said that he rarely encountered this sincerity and peer support in his other visits, especially in Europe.

He acknowledged there would be a long process of discernment to become a Salesian religious, but the fact that there are young people in our Salesian presences considering Salesian religious life as their vocation is an amazing grace. To encourage the young men along this path, Fr. Ángel told them to visit him in Italy and bring their friends with them. The students all applauded. He further remarked that maybe a future Rector Major would come from these works in SUO or SUE!

These personal encounters with the young in our Salesian presences were part of the reason Fr. Ángel could say he sees life and hope in SUE and SUO. We shouldn’t take this for granted, but let it challenge us to "be the kind of Salesians the young people need today." We were proud to inform Fr. Ángel that 135 graduates from Don Bosco Prep, Ramsey, entered the diocesan seminary or religious life. Some graduates who became SDBs were present at the Thanksgiving banquet as living testimonies of this proud heritage. This continues our living Salesian tradition, imitating Don Bosco who was preoccupied with helping young people follow God’s call wherever it took them, sending more young men to the diocesan seminaries than those who became Salesians. The encounters of the Rector Major with our young people today show this is not only a glorious history but a current reality.

As we celebrate the Nativity of our Lord, we can reflect on our privileged role of accompanying young people to Jesus, who is humble, close to us in our poverty, and in whom dwells the whole fullness of God, now in human flesh. Like the shepherds, we can invite the young, "Let us go to see this thing that has taken place, which the Lord has made known to us." Once meeting Jesus, may our young people go forth "glorifying and praising God for all they had heard and seen, just as it had been told to them" (Luke 2).

For all consecrated religious and all those discerning a vocation to the consecrated life. END_OF_DOCUMENT_TOKEN_TO_BE_REPLACED

The mission puts who we are and what we do in a few words. END_OF_DOCUMENT_TOKEN_TO_BE_REPLACED