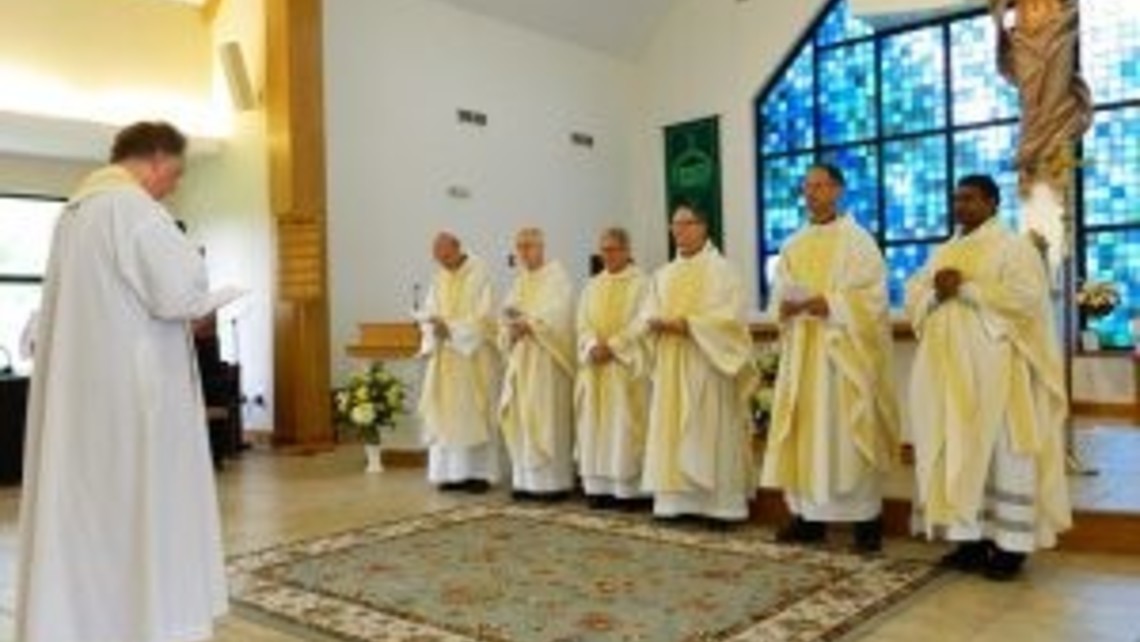 (New Rochelle, N.Y. – September 18) – Unless you’re dealing with Earth’s geology or with astrophysics, 855 years is a lot of years (even if it doesn’t quite catch up with the reported ages of the biblical patriarchs).

855 is the total number of years that the New Rochelle Province celebrated on September 8 as it honored 17 jubilarians and thanked God for their years of ministry, primarily in our province. They included priests celebrating anniversaries of ordination and/or religious profession and Bro. Sal Sammarco, celebrating the 50th anniversary of his profession.

Only ten of the jubilarians were able to be present for the celebration at the Marian Shrine in Haverstraw, N.Y.—the other seven constrained by poor health, distance, or pastoral responsibility—or, in Fr. Leonard’s case, helping to host the Rector Major in Montreal.

The celebration was originally scheduled to coincide with Fr. Angel Fernandez Artime’s pastoral visit to the U.S. When the U.S. Government impeded that visit, Fr. Tim Ploch stood in for the Rector Major. A member of the general council since 2014, representing the Interamerica Region, Fr. Tim is always happy to return to his home province, and the province more than ready to welcome him.

Following an assembly of Salesian Family members earlier in the morning, the jubilees celebration attracted a large crowd of Salesians, Salesian Sisters, Salesian Cooperators, Salesian Lay Missioners, ADMA, Don Bosco Volunteers, students from Salesian schools, parishioners from Salesian parishes, alumni, and relatives and other friends of the jubilarians, nearly filling the Shrine chapel for Mass and quite filling the pavilion after Mass for a buffet lunch.

The Eucharistic liturgy of September 8 celebrates the Birth of the Virgin Mary. Hence, Fr. Ploch’s homily focused on her as “a living example that all things work for good for those who trust God” (cf. Rom 8:28, from the first reading). That was true for Mary because she responded positively to God amid so much confusion, anxiety, and pain in her life; Fr. Tim cited various episodes recorded in the Gospels.

Fr. Tim also noted that St. Joseph responded, as well, to what God told him to do: “to be a father to a child who was not his.”

Repeating, he said that “all works for the good for those who love God and work for him.” This becomes true in Salesian lives, which we can see if we look back reflectively and see where we tried to integrate into our lives what God has sent to us. And so “we trust him for the future.”

Finally, Fr. Tim applied that lesson to the lives of the 17 jubilarians and paid credit to their faithfulness.

Speaking for the priest jubilarians at the end of Mass, Fr. Puntino voiced gratitude to God and confreres for the grace of their vocation lived in the context of changing and sometimes turbulent times, starting for himself and his four classmates with “the year of three Popes” (1978). Bro. Sammarco spoke for the profession jubilarians, expressing appreciation for family and then for God, Mary, and confreres.

Music was provided by staff and students from Don Bosco Prep, Ramsey, N.J.

Fr. Eunan McDonnell is preaching the retreats at Haverstraw and in Ontario. END_OF_DOCUMENT_TOKEN_TO_BE_REPLACED

We trust that God will fulfill our hopes, too. END_OF_DOCUMENT_TOKEN_TO_BE_REPLACED

Let us renew our commitment and enthusiasm to be catechists. END_OF_DOCUMENT_TOKEN_TO_BE_REPLACED