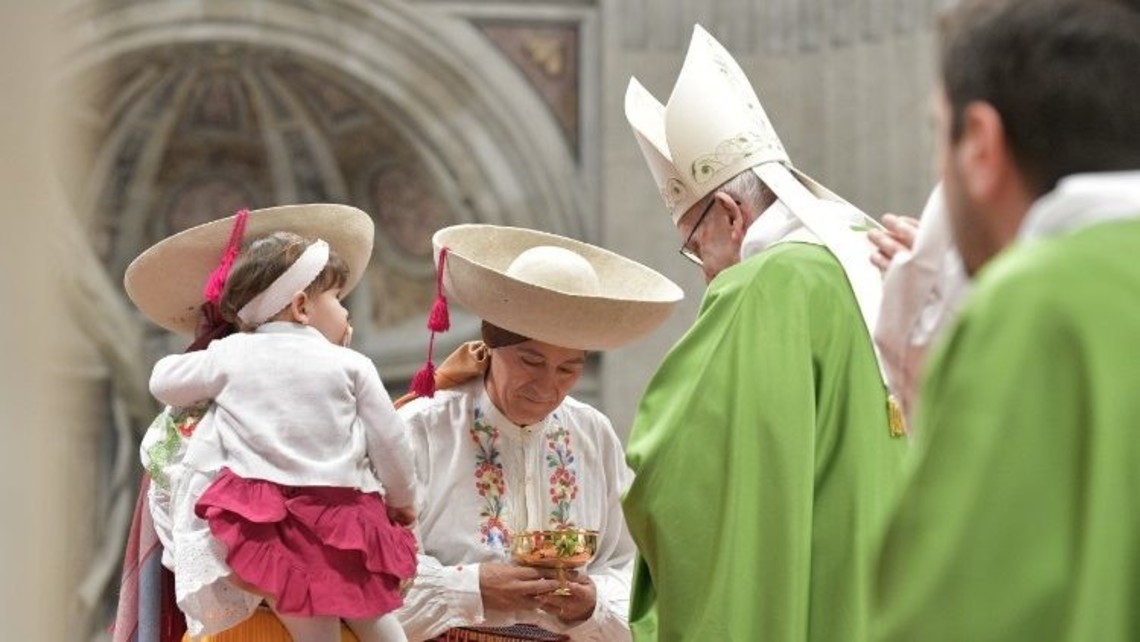 “Migrants and refugees don’t represent just a problem to be solved, but are brothers and sisters to be welcomed, respected and loved.”

On Sunday, January 14, 2018, Pope Francis celebrated the Sunday morning Mass St. Peter’s to mark the church’s 104th World Day of Migrants and Refugees. From the beginning of his pontificate, Pope Francis has demonstrated a special predilection for migrants and refugees. His first trip abroad as Pontiff was to visit migrants and refugees on Lampedusa, an island that became a focal point for receiving migrants and refugees fleeing war and oppression. Thousands perished as they took the perilous journey in boats that were not sea-worthy. The homily he delivered on the day of his visit was an impassioned plea to the world community to respond to the suffering of those who find themselves on the move. He presented this as an obligation, not a request. Notably, in the reform of the Curia, Pope Francis personally oversees all migration issues (http://bit.ly/2c0LplP), and he has established a Migrant and Refugee Section in the Curia. You can follow his regular postings here.

The US Catholic Conference of Bishops (USCCB) has also been calling on the Church of the USA to raise our awareness of and compassion for migrants. This year they sponsored a week of prayer and activities January 7-13, 2018 with the theme Many Journeys, One Family. In announcing the week and theme the bishops said that it was “…  an opportunity for the Church to reflect on the circumstances confronting migrants, including immigrants, refugees, children, and victims and survivors of human trafficking.” They sought to draw “… attention to the fact that each of our families has a migration story, some recent and others in the distant past. Regardless of where we are and where we came from, we remain part of the human family and are called to live in solidarity with one another.”

In light of the ongoing debate in the USA, the statement the bishops made about migration, one that was prepared many months ago, is important for us to reflect on. It should also move us to take action on behalf of the vulnerable men, women, and children who have often found themselves living in fear and feeling that they are considered less worthy than other children of God.

“Unfortunately, in our contemporary culture we often fail to encounter migrants as persons, and instead look at them as unknown others, if we even notice them at all. We do not take the time to engage migrants in a meaningful way, as fellow children of God, but remain aloof to their presence and suspicious or fearful of them. During this National Migration Week, let us all take the opportunity to engage migrants as community members, neighbors, and friends.”

While many of us may not have participated in the formal week of prayer and action on migration, it seems timely and prophetic for us to now raise the issue in our ministries on an ongoing basis throughout the year. Working for justice and the dignity of all peoples is not limited to a week of prayer, a homily, a class, a workshop, a poster, or a petition. It demands that we work to create a culture of encounter and inclusion every day. We need to utilize all the means available to us, including social media. Imagine the impact of many committed prophetic voices regularly speaking of the dignity and contributions of migrants and refugees on the various platforms of social media.

The USCCB[1] produced a number of resources to assist those who would like to lead their faith communities in prayer on the topic of Migration. While they were produced to facilitate involvement in the Migration Week awareness campaign, they can be utilized throughout the year. Resources can be accessed through the links provided here.

The dignity and common humanity of all people must be honored and respected by all people no matter where they were born, no matter their social status. In the midst of the ongoing debates, will we stand up for the dignity of all as children of God? Will we speak strongly about our shared humanity and worth? Will we engage in Gospel-inspired dialog to address the problems that arise from irregular migration? Will we be prophetic disciples?

Saint Pope John XXIII, in Pacem in Terris (1963), reminded us of the human right to seek out a better life for oneself and one’s family. He made his point while also reminding us all that the family of nations had agreed on this right in their passage of the Universal Declaration of Human Rights. Governments throughout the world are to use this Declaration as a template for their own good governance. This is what Saint Pope John said:

In the Universal Declaration of Human Rights (December 1948) in most solemn form, the dignity of a person is acknowledged to all human beings; and as a consequence, there is proclaimed, as a fundamental right, the right of free movement in search for truth and in the attainment of moral good and of justice, and also the right to a dignified life.

In his homily at the Mass for the World Day of Migrants and Refugees, (January 14, 2018) celebrated with a number of migrants and refugees living in the Diocese of Rome, Pope Francis stressed that migration today is a sign of the times. “Every stranger who knocks on our door is an opportunity to meet Jesus Christ, who identifies himself with the foreigner who has been accepted or rejected in every age”.

He went on to say:

In today’s world, for new arrivals to welcome, to know, and to acknowledge means to know and respect the laws, the culture, and the traditions of the countries that take them in. It even includes understanding their fears and apprehensions for the future. For local communities to welcome, to know, and to acknowledge newcomers means to open themselves without prejudices to their rich diversity, to understand the hopes and potential of the newly arrived as well as their fears and vulnerabilities.

… I would like to reaffirm that our common response could be articulated around four verbs founded on the principles of the Church’s doctrine: welcoming, protecting, promoting, and integrating.[2]

Migrants and refugees are our brothers and sisters. Pope Francis asks us to make sure that this is our starting point as we seek to enact and enforce policies that guarantee the rights of those on the move and those of the receiving communities. When the dialog begins with acknowledging what unites us and our shared human dignity, promoting just policies that are guided by Gospel values and Catholic Social Doctrine is more possible. When fear of the “other” and denying their equal humanity, dignity, and worth direct the discussion, injustice follows.

As Salesians, we are passionate about accompanying vulnerable and marginalized youths and their families. Our experience assisting those who are excluded and discarded can help inform the public dialog on migrants and refugees. Will we accept the call of Pope Francis to help create a culture of encounter and inclusion?

[1] Quotes from the USCCB and direct link to the resources.

[2] The full text of the Homily of Pope Francis

Thanks to everyone who participated in the various events with Fr. Ángel and Fr. Hugo. END_OF_DOCUMENT_TOKEN_TO_BE_REPLACED

Thank you to everyone who helped with and prayed for this beautiful and historical visit! END_OF_DOCUMENT_TOKEN_TO_BE_REPLACED