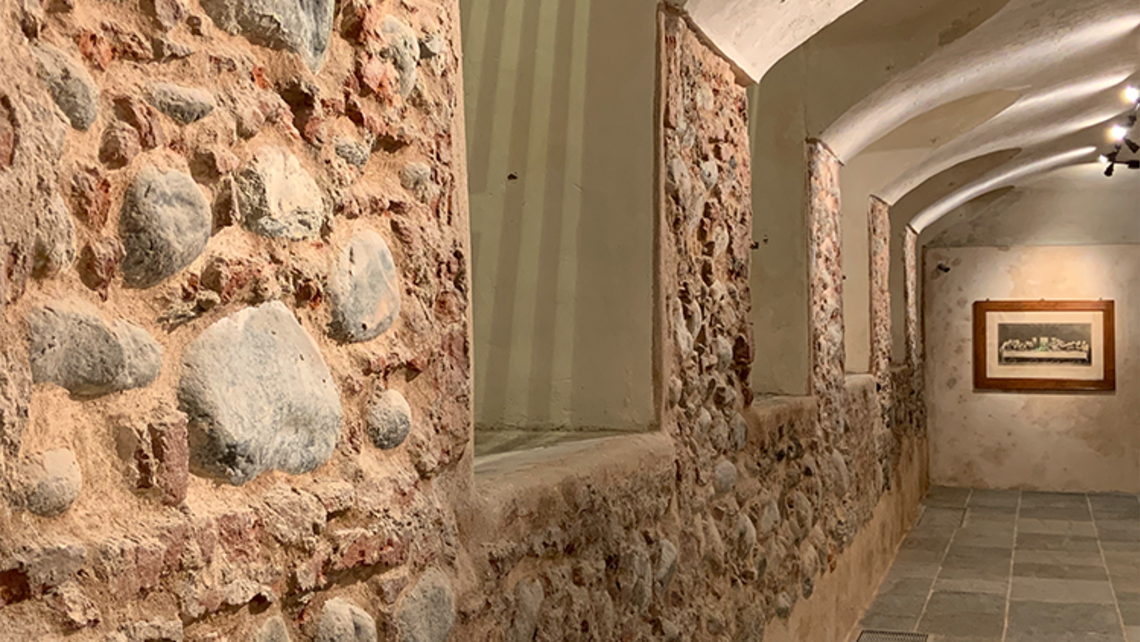 Don Bosco’s Salesian mission is forever linked to Easter joy. The Valdocco Oratory began with the celebration of Mass in the Pinardi Chapel on Easter Sunday 1846. In 1934, Don Bosco was proclaimed a saint on Easter Sunday. Today, this paschal motif is reflected in the new chapel in Museo Casa Don Bosco, with its minimalist design and rounded walls to evoke the empty tomb of Easter morning.

St. Peter offers a rich metaphor for all who are baptized into Easter joy, a metaphor which resonates within the walls of Valdocco: “Come to Jesus, to that living stone, rejected by men but in God’s eyes chosen and precious; and like living stones be yourselves built into a spiritual house…” (1 Pt. 2:4-5).

This is precisely what Don Bosco did at the Oratory—build a spiritual house. From 1846 to 1861, the Oratory was an ongoing construction site, literally and spiritually. Both St. Peter’s baptism catechesis and our Salesian heritage remind us of our identity as spiritual “Church Builders.” which is not to be confused with material “builders of churches.” Where St. Peter exhorts the baptized to draw near to Jesus, a living stone, in order to be built up as a spiritual house, Pope Francis, provides the blueprints for that building project: “be bold and creative in [the] task of rethinking the goals, structures, style and methods of evangelization in [your] respective communities” (Evangelli Gaudium, n. 33). This could well be the mission statement for the early Oratory, which was nothing if not a bold, creative rethinking of how to evangelize and how to build a Church.

In Salesian jargon, the focus of this rethinking and Church building is the local Educative-Pastoral Community (EPC), that is, the team of young people, consecrated women and men, laypeople, and priests. In the spirit of Don Bosco, they work together in ways appropriate to each one’s vocation to make their local environment an Oratory where the Risen Jesus is experienced in a concrete way.

The inspiration for this reflection comes from within the stone walls of the boys’ first dining hall in the Oratory "underground." In 1856, Don Bosco tore down the Pinardi House to build a more suitable home for his ever-expanding family. Funds were tight and enrollment was high. So, he dug deep before he built up. Literally and metaphorically, these stone walls are the foundation not only of the Oratory’s first dining hall but also of a Salesian experience of educating and evangelizing.

In this dining hall, up to 200 boys at a time were nurtured by God's providence. Here, they received more than their daily bread. They built themselves up in faith, hope, and love through the family spirit they shared. In the process, they learned the value of their own contributions. The stones used to build these walls are keepers of a precious Salesian legacy. Each one was carried to the construction site by a boy from the Oratory, in response to Don Bosco's invitation: "In your free time, go to the river and bring back the biggest stones you can carry, so that we can build our house more quickly.”

Emerging from poverty to build hope.

Like the boys who carried them, these stones were "baptized" by poverty and sacrifice, rejected by men but chosen and precious in God’s eyes. The young people did not haul them from the waters of the Lungo Po, which winds graciously through the posh, aristocratic neighborhoods on Turin’s south side. No, they drew them from the polluted shores of the Stura and Dora Rivers, which ran a gritty course through Valdocco’s toxic ammunition factories, mills, bordellos, slaughterhouses, and the residential squalor of Borgo Dora, very much, as Pope Francis would say, on the periphery of society.

These stones tell the story of visionaries young and old whose feet were firmly planted on the ground: men, women, and children, laypeople, and priests, who accepted the task of rethinking "the objectives, structures, style and evangelizing methods of their community.” They built a new experience of a Church by nourishing the young Body of Christ in original ways, offering faith formation, education, job security, and protection from exploitation as a path of holiness. These living stones honor the diligent work and vibrant faith through which the Oratory was built into a spiritual edifice.

Don Bosco invited his young people to be protagonists of hope, and they did not disappoint. These walls could serve as a footnote to the Frame of Reference for Salesian Youth Ministry which reminds us that youth ministry is authentically Salesian to the extent that it treats young people not as empty recipients to be filled, but as protagonists who have something precious to offer. Youth ministry builds up the young when it is more than a “pious escape” from the raging rivers of life. It changes lives and opens hopeful horizons when it empowers the young to face everyday life responsibly by building their identities and their future on that cornerstone who is the Risen Jesus. Like the boys whom Don Bosco invited to bring stones to build their own dining room, young people today need to discover their unique role in building up the Church through their own life of faith, hope, and responsible service in their God-given vocation.

When Don Bosco was beatified in 1929, his remains were carried in solemn procession from the Salesian school in Valsalice to the Basilica of Mary Help of Christians in Turin. The wooden and crystal urn used that day was crafted by Salesian artisans at the school of St. Benigno. Today, it is supported by four large stones, also drawn from the Stura and Dora rivers. These living stones still speak. In life, Don Bosco supported the young in the process of drawing close to Jesus and building themselves up as a spiritual edifice. Today, the young hold up Don Bosco as their friend and father who has passed from Valdocco into Easter glory.

"To Be Together as Brothers"

May the retreats bear much fruit in our mission to the young. END_OF_DOCUMENT_TOKEN_TO_BE_REPLACED

From June 17-23 , please pray in your communities and works for Andy Lagunas and Ann Steffen , who are Salesian Lay Missioners... END_OF_DOCUMENT_TOKEN_TO_BE_REPLACED

"I believe it was a call from God." END_OF_DOCUMENT_TOKEN_TO_BE_REPLACED