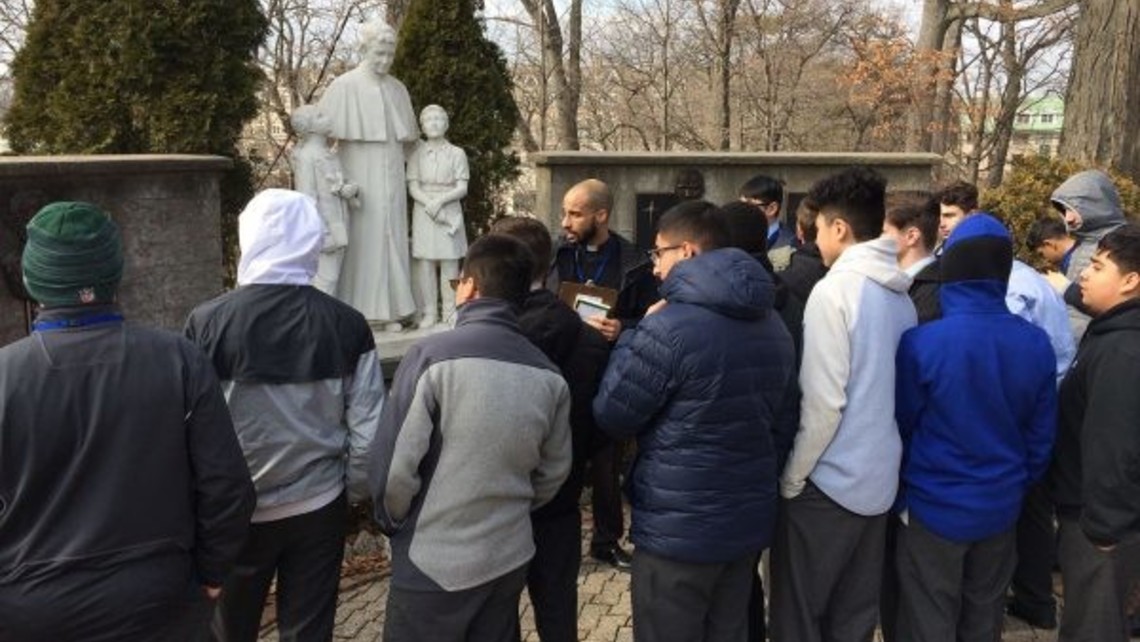 To many of the students of Salesian High School in New Rochelle, the provincial house is just “that big house on top of the hill.” When I started my teaching assignment in the autumn of 2017, I assumed that all the students knew that the house served as a residence for priests and brothers; I quickly discovered, however, that this wasn’t the case! One day I was discussing the evangelical counsels with one of my freshman classes, and a student’s hand shot up into the air. When I called on him, he asked, “But Brother, if you take a vow of poverty, where do you live?” The question surprised me—and when I told my students that I lived in that big house on top of the hill they were equally surprised! A barrage of questions about living arrangements in the house followed, and then and there I decided to give the students a tour of the house.

Following the tour, I made a contest, inviting the students to write articles about their experience. I promised the winning student a gift card for the coffee shop nearby, and that his article would be published in the Salesian news bulletin. I enjoyed reading all of the students’ articles; but there were two students whose writing style and observations made their articles stand out. After I consulted with Fr. Bill Ferruzzi, Thomas Ramunno’s article was selected as the winning essay.

Since I was about eight years old at Camp Echo Bay, I always wondered what was in the big house on the top of the hill. I was told the brothers lived there, but I really didn’t know what a brother was back then. As I got older at camp, I understood what the house was for; but I was still curious about what was inside.

I was excited to find out that, as a freshman at Salesian, I would finally be able to see the inside of the provincial house. As we walked up the hill, I was trying to picture what I would find; I was surprised to find out there were things that I did not expect. My first reaction when I walked in was that the house is massive. The ceilings are very high, and there are long hallways. The first thing I remember was the bust of St. John Bosco. I’m not sure why but this stands out in my mind. The dining room also impressed me since I never saw a dining room that can fit twenty-four people. It was bigger than my living room and dining room combined! The next room we visited was the library. It was interesting to learn how much reading was done by the brothers during their down time. The chapel was our next stop. I never expected to find a chapel inside the house, especially since there was one at the school.

Another big surprise was the lounge room. I guess I never expected to hear that the brothers could just go into a room and hang out. It was funny to picture the brothers racing to the room to get control of the remote to pick the show they would watch. The more I thought about it, the more understood that brothers are just like everyone else. Something else I did not expect were the underground tunnels and offices in the basement. I had no idea of how much work went on behind the scenes of the school and provincial house. Another interesting thing I learned was that each brother has a private bathroom. I don’t know why this stood out, but I guess it’s because in my house five people share a bathroom and shower.

The last two things we saw were the garden and the cars. I was thinking that it must be hard for all those people to share cars. In a way it shows how the brothers live as a group who share and are patient enough to take turns. I think most people would not be able to share cars without constantly arguing. The garden was something else which showed how everyone worked together for a common goal.

I am now fifteen years old and not the little kid who saw this big house on the hill. After this tour, I see that the building is not just a house for brothers; instead, it represents a way of life. The brothers took a building that looks one way from the outside, but, when you take a closer look, it represents the values we learn at Salesian. It represents Christian values such as harmony and brotherhood. It makes me see that we all can just try a little harder to get along with each other and that so much can be accomplished when we work together toward a goal.

Thanks to everyone who participated in the various events with Fr. Ángel and Fr. Hugo. END_OF_DOCUMENT_TOKEN_TO_BE_REPLACED

Thank you to everyone who helped with and prayed for this beautiful and historical visit! END_OF_DOCUMENT_TOKEN_TO_BE_REPLACED