The July Message of the Rector Major 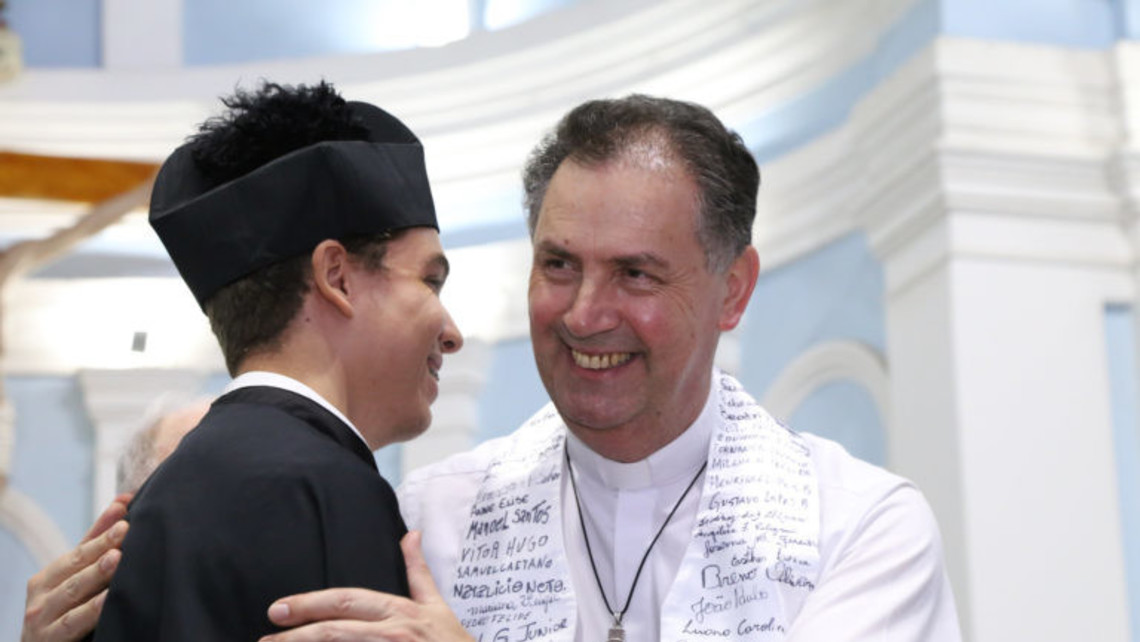 and a heart that doesn’t forget

I want to carve into my memory and yours the inestimable value of every human encounter, however brief or lengthy, deep or quick it might be. If it’s a human encounter, it’s always special and we have to make it special. We’ll have a much richer life if we live it this way.

I’m delighted to meet you again in our monthly appointment. Through the Salesian Bulletin, which Don Bosco founded and loved so much, he wanted to make known the good that was being done in our Salesian houses, especially in the Salesian missions. Don Bosco also hoped through the Bulletin (and other communications) to find many who would want to help him carry out his mission among the young. This province newsletter serves much the same purpose.

I’d like to share with you a simple reflection about two things that happened to me during my visits with Salesians around the world. The protagonist, in each case, is a stole.

Certainly, I need to begin by explaining what a stole is since not all our readers may be familiar with this term. The stole is a distinctive liturgical vestment that priests and deacons wear. The priest puts it over his shoulders, behind his neck, and lets it fall down in front past his belt. It marks the priest’s distinct dignity and consecration as one who is to serve the People of God; it brings to mind the sweet yoke of our Lord, the obligations of the priestly office, and it symbolizes in some way the sheep whom the Good Shepherd bears on his shoulders.

In recent months, I was given three stoles that hold great significance.

The stole of an anonymous woman

The first stole was given to me during the feast of Mary Help of Christians, May 24, at Valdocco. It’s a beautiful stole, hand-embroidered with gorgeous gold thread, which had to have taken hundreds of hours of work. A lady devoted to Mary Help of Christians and to Don Bosco wished that it be worn for the celebration of Holy Mass and in the great procession of Mary Help of Christians that evening. It had been made with great sacrifice, simply, and with such great generosity and so much love for the Madonna. I celebrated the Eucharist wearing that stole, and I prayed in the procession with that stole, offering all the prayers of the thousands and thousands of people who were there, and my own in particular, for that woman (whom I didn’t know because the gift had been made anonymously), whose heart overflowed with love for the Help of Christians and with faith in the Lord.

The stole of the youths under bombardment

I received the second stole at Damascus, Syria, on an afternoon when hundreds of boys and girls were gathered in the Salesian youth center. We celebrated the Eucharist that afternoon with more than a hundred young university leaders. At the end of Mass, believing ardently that peace was near, just at the moment when we released a white dove as if to say to everyone that they could rejoice for peace, some mortar shells fell very close by.

So that afternoon those wonderful young leaders, with solemn faces and a faith that they really lived, gave me a handsome stole on which was embroidered in Arabic, “Remember us whenever you celebrate the Eucharist.”

The stole of the young prisoners

I received the third stole a month ago, during my visit to Mato Grosso in Brazil. At the end of a meeting with the young, one of the teachers gave me a stole bearing on its back, written with indelible ink, the first and last names of the 56 young people in our Salesian house. These aren’t young people with just any story. They’re youths who have been sentenced to what once was called juvenile detention, a reformatory; they’re young people deprived of their freedom, because of some offense, who after a judicial hearing have been entrusted to us.

They couldn’t come to our meeting, but they’d sent me the stole with their names, asking that I not forget them and promising that they, in turn, would remember me. I can assure you that every day I remember them at the Eucharist.

I believe heartily in the attunement and communion of hearts. I believe strongly in prayer, especially when we pray for others. Praying for others is an expression of true love, whether we know them or not, people who come to dwell in our hearts at the moment that we remember them. In these years, I’ve come to understand ever more clearly why Pope Francis implores us insistently to pray for him.

That’s why I want to leave you this testimony of the precious value of these three stoles.

I want to carve into my memory and yours the inestimable value of every human encounter, however brief or lengthy, deep or quick it might be. If it’s a human encounter, it’s always special and we have to make it special. We’ll have a much richer life if we live it this way.

I want to etch into our minds how faith succeeds in moving hearts and wills. I have seen this everywhere in my journeys around the Salesian world.

I want to state for the record that every day I understand better what Don Bosco wrote to the boys at Valdocco when he was far away from them. He called them “thieves.” Yes, that’s what he called them: “You’re all thieves,” he said, and then he added, “because you’ve stolen my heart.”

It’s so beautiful to feel that one’s heart can be stolen freely and in a very oblative way when it seeks only the good of other persons.

I bless you all, and I promise you that the next time I put on one of these stoles I’ll also remember you, with whom I have shared the profound meaning they have for me.

There will be a video released each day of the novena. END_OF_DOCUMENT_TOKEN_TO_BE_REPLACED

This free event is open to everyone! END_OF_DOCUMENT_TOKEN_TO_BE_REPLACED

Thus, we can continue the historical and spiritual journey. END_OF_DOCUMENT_TOKEN_TO_BE_REPLACED