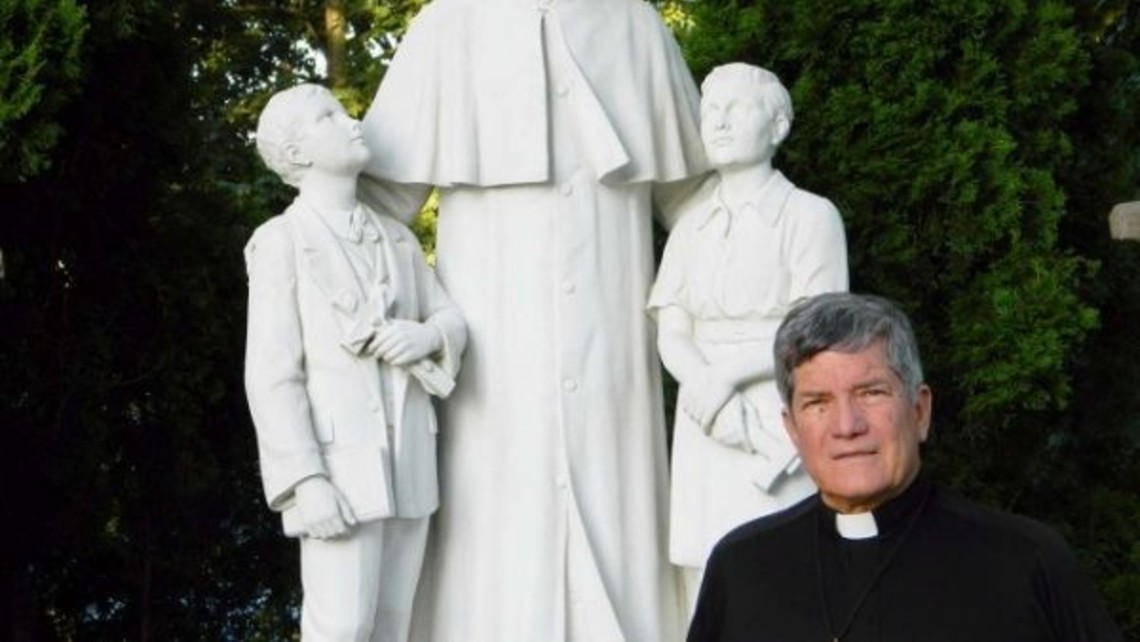 (New Rochelle, NY – September 13) – Since his arrival in Liberia almost 40 years ago, Fr. John Thompson has served in five countries in West and South Africa, survived two ferocious civil wars, and grown ever more in his love for the people he serves as one of Don Bosco’s sons.

Every couple of years Fr. John returns to the US to visit his extended family around the country, to speak on behalf of Salesian missionary work, and to raise some money to advance that work. He arrived at the provincial house in New Rochelle on September 11 and has been speaking freely with the confreres about his experiences in over 50 years of Salesian life. This year he’s one of the province’s jubilarians, professed on August 15, 1969, and ordained on May 26, 1979.

Fr. John’s latest mission, since last November, is as pastor of Sacred Heart Parish in Maseru, Lesotho, where every weekend he celebrates two Masses in the Sesotho language—which he’s just learning—and one in English. The first two draw congregations of 600 and 1,400; the last, just 40.

He has been in the Southern Africa Province since May 2009 and seen service, mostly as a parish priest, in Swaziland (2009-2012) and Johannesburg (2012-2018) before his mission to Maseru. He’s had to learn two other African tongues, Zulu and Siswati, in his ministry.

Origins of a Missionary Vocation

From the time he was a novice, Fr. John desired to go to the missions, and he applied several times without being accepted. Finally, Fr. Bernard Tohill, general councilor for the missions at the time, allowed him—a student of theology in Columbus, Ohio, at that time—to spend the summer of 1978 in Guatemala, working alongside Australian missionary Fr. Tony DeGroot among the native people in the mountains. This experience confirmed then-Bro. John in his sense of being called to the foreign missions. This time his application was accepted. Fr. Edward Cappelletti, director of Salesian Missions in New Rochelle, encouraged Bro. John to visit the work of Fr. Javier de Nicoló in Colombia for street children and troubled youths before he came back to the U.S.

So it was that after his ordination he and three other confreres were designated as the first Salesian team for West Africa as Project Africa was kicking off. Because of some health issues, Fr. John had to wait until March 1980 actually to go to Monrovia. He recalls that the Congregation asked the Salesians of the U.S. to sponsor the Liberian mission, but the provincial and council in New Rochelle declined, in view of other commitments at that time. That’s how Liberia became a mission of the British Province.

Missions in Liberia, and Civil War

In both Monrovia and the newly-opened mission at Tappita, Fr. John enjoyed the collaboration of men such as Fr. Larry Gilmore, the late Bro. Bill Regner, and the future martyr lay missionary Sean Devereaux.

Only months after Fr. John’s arrival in Liberia, there was a coup, and a long civil war began. Eventually Fr. John and Fr. Larry had to leave Tappita and return to Monrovia. One of their greatest sorrows was seeing so many people killed, many of them out of tribal rivalries. Fr. John negotiated with the rebels, especially on behalf of prisoners and others in danger, often successfully. But he didn’t hesitate to confront wrongdoing, and sometimes this got him into hot water. He also saw people murdered before his eyes, and on several occasions his own life was at risk.

On several occasions Fr. John met the rebel leader Charles Taylor, whom he describes as “a very bad man.” When Taylor was put on trial in The Hague for war crimes, Fr. John was ready to go and testify against him, but he saw that it wouldn’t be necessary because the man’s guilt was more than evident; he’s now serving a 50-year sentence in British custody.

The Salesians were able to return to Tappita in the late 1990s but subsequently had to withdraw again. Only in 2018 were they able to re-open the mission.

In 1998, with Liberia still at war, Fr. John was transferred to Sierra Leone, a mission sponsored by the two U.S. provinces. He spent about a year at the original mission in Lungi, then moved over to the capital, Freetown, to start a work for street children, for which he was able to draw on not only his own Salesian instincts but also what he’d observed in Fr. de Nicoló’s project in Colombia. That work became all the more important in the aftermath of Sierra Leone’s civil war, when it helped rehabilitate former child soldiers and other young victims of the war. Once more, the Salesians suffered with their people through a violent civil war (depicted in the film Blood Diamond). From his earlier experience of dealing with rebel forces in Liberia, Fr. John was able to help guide his confreres and their people through this tragedy, although they suffered material losses such as vehicles and equipment.

From that mission the flourishing work of Don Bosco Fambul grew with great support from such local Salesians as Bro. Regner, Fr. Dominic DeBlase, and Fr. Al Mengon (among others). Fr. John remained in Freetown until late 2008 before his transfer to South Africa.

The Salesians of Anglophone West Africa received a great deal of financial support from American Salesians, the U.S. Church, and their own families. Fr. DeBlase, as a former provincial, was also able to influence the superiors in Rome to direct some considerable funds raised by Salesian Missions of New Rochelle to Sierra Leone for several years because of that country’s dire poverty.

Fr. John was born 69 years ago in the Panama Canal Zone, where his father worked for the U.S. Government on the canal. His mother often brought him into Panama City to visit the church of St. John Bosco, Panama’s patron saint, and so young John developed a love for Don Bosco. Two of his brothers went to New York to become Salesian aspirants, and John aspired to follow. Since grade school, he’d nurtured a desire to become a priest.

Mr. Thompson was reluctant to let another son venture toward priesthood and religious life. (In fact, neither Robert nor George persevered in Salesian life.) Finances were also a factor. But the Knights of Columbus intervened very generously, and thus in 1965, John undertook a long solo journey—by train across the isthmus of Panama, ship to New Orleans, and bus to New York (before there were many interstate highways) to enter Salesian Junior Seminary in Goshen, NY, as a sophomore. He spent three happy years there before going on to the novitiate in 1968 and making his first profession in 1969.

After graduation from Don Bosco College in 1973, he did practical training at Don Bosco Prep in Ramsey, NJ, and then studied theology at the Josephinum in Columbus from 1975 to 1979.

What Were the Greatest Challenges as a Missionary?

The first challenge that Fr. John mentioned was health. Malaria was a constant in West Africa. Far more serious, however, were the civil wars, the pain of seeing people killed out of tribal hatred. All the trials of war remind Fr. John of St. Paul’s missionary tribulations—imprisonments, beatings, shipwreck, etc. It also pained him that neither Liberia nor Sierra Leone allows white foreigners to become citizens.

What Were the Greatest Satisfactions?

There was great satisfaction in saving lives during the wars. It’s a matter of pride that the Salesians stayed at their missions throughout. Serving God through the poor and offering his life for them is a precious vocation. Fr. John can’t foresee ever returning to the US to retire but wants to remain on mission until death like our American confreres Fr. Jack Trisolini in Korea, Fr. Harry Peterson in Chile, and Br. Regner in Sierra Leone.

Two groups each spent a week of service, prayer, activities, and brotherhood. END_OF_DOCUMENT_TOKEN_TO_BE_REPLACED

All six newly professed sisters were guided in their novitiate at Newton, NJ. END_OF_DOCUMENT_TOKEN_TO_BE_REPLACED

Communication is to channel messages from above and honor inspiration every time. END_OF_DOCUMENT_TOKEN_TO_BE_REPLACED