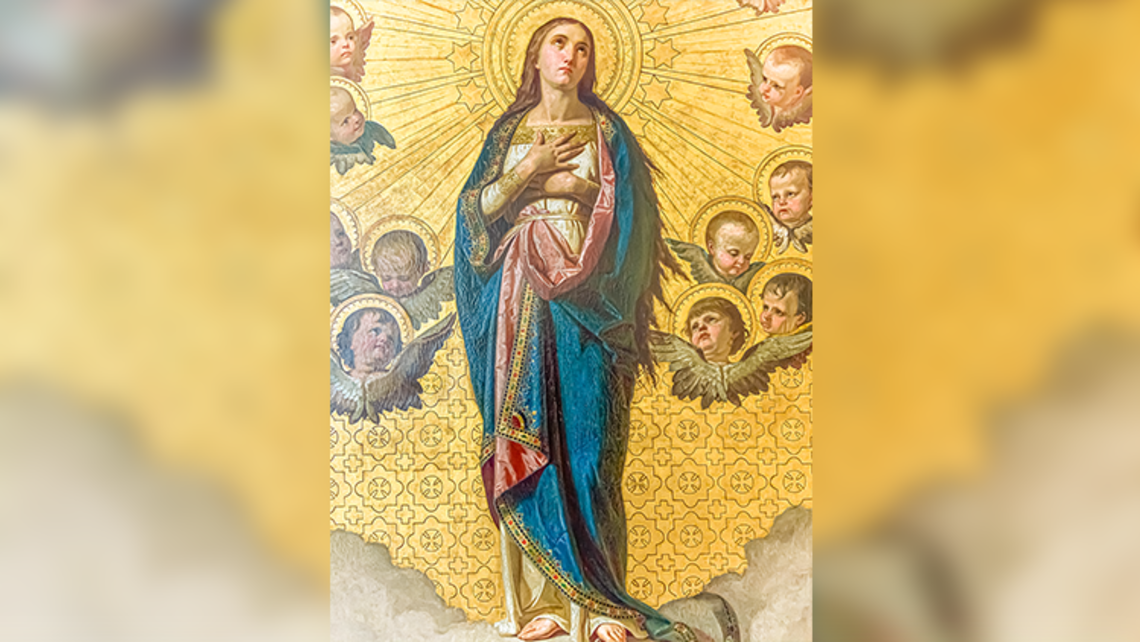 One of my favorite pieces in the new Casa Don Bosco Museum in Valdocco honors Mary as the Immaculate Conception. It was commissioned by Don Bosco in 1882 for St. John the Evangelist Church at his second Oratory, dedicated to St. Aloysius. Mary is depicted with classical attributes of youthful feminine beauty: free-flowing, waist-length hair, and obvious, if understated, bodily contours. These details were added at Don Bosco’s insistence after he failed to approve Rollini’s sketch for the painting in which both details were lacking.

One Woman, Many Dresses

Although Don Bosco is best known as the apostle of Mary, Help of Christians, his devotion to Mary transcended all titles and shifted over time. For the Father and Teacher of Youth, Mary is always the Madonna, Our Lady, always Theotokos, Mother of God and Mother of Jesus, always present in the Church to guide, defend and intercede for her children as a loving mother, always faithful to her God-given role in his plan of salvation, always the object of a tender, personal relationship.

Perhaps a summary for Don Bosco’s constant love of Mary under different titles might be: “the same woman, in a different dress.” At various moments in Don Bosco’s personal and pastoral life, a particular Marian devotion rose to prominence. This is certainly true of Mary as the Immaculate Conception.

A Guiding Presence becomes an Article of Faith

As we celebrate the feast of the Immaculate Conception in 2020, we can draw parallels between our times and those of Don Bosco. Navigating a pandemic in the midst of charged political change was also part of our founder’s experience, in which Mary Immaculate offered perspective and guidance.

Don Bosco’s Turin in the 1850s was facing epochal transformation on all fronts. Where liberals saw progress, conservatives saw demise. Where conservatives saw goodness, liberals saw evil. The liberal political revolution (1848) had turned the Kingdom of Sardinia into a parliamentary constitutional monarchy. The Mazzinian Roman Republic drove Pope Pius IX into a yearlong exile (1849-50). An unprecedented secularization of society was curbing the power of the Church. A lay school system was introduced (1848). The Siccardi Bill (1850) abolished many of the Church’s ancient privileges and pursuant to the Cavour-Rattazzi Bill (1855), religious congregations were disbanded and Church property was confiscated. It was a perfect storm between “conservative” and “liberal” forces.

Add this to the mix: in 1854, the cholera pandemic was ravaging Turin and taking a toll on the Oratory.

In this turbulent context, Pope Pius IX turned to Mary Immaculate. On August 1, 1854, months before proclaiming the dogma of the Immaculate Conception, he proclaimed a special jubilee seeking the Immaculate Virgin’s protection. This was an expression of faith colored by not-so-subtle political overtones. In his subsequent Bull, Ineffabilis Deus, the pontiff speaks of Mary Immaculate as the One who, totally pure, crushed the serpent’s head, who destroyed all heresies, who is the sure defense of the Church, who saves the Christian people from the most deadly evils and is their sure refuge and faithful help. In other words, Mary Immaculate is presented as the symbol of the victory of good over evil. (cf Arthur Lenti, Vol. V Chapter 3, Don Bosco and Mary Immaculate Help of Christians in Historical Context).

In the midst of all of this, the Immaculate Conception, who was a guiding presence at the beginning and development of the Oratory, emboldened Don Bosco in his non-political response. The growth of devotion to the Immaculate Conception in the broader ecclesial context, coupled with his first and subsequent dreams about his mission, provided Don Bosco with an interpretive key for his apostolate. Mindful of the political foment all around the Oratory but rising above it, Don Bosco sought the Immaculata’s intercession to save society from “the powers of evil”— not through political action but through faith in action, the raison d’être of the Oratory. First, by educating and catechizing the young to become Christian leaven for the positive transformation of society. Secondly, by presenting Mary Immaculate as a lens to interpret his educational project. In his Month of May, Don Bosco would write that “The Immaculate Virgin, the Mother most pure, hates everything that is contrary to holy purity.”

Don Bosco’s insistence that Rollini’s painting convey the Immaculate Conception with bodily beauty in some way presages St. John Paul’s Theology of the Body, a catechesis in which the human body is presented as necessarily the hinge to the sacred. To be sure, “holy purity” includes bodily chastity, but it is much more. The holy purity modeled by Mary is the intentional, total self-giving to one’s God-given mission for the good of others. Mary embodies “holy purity” in mind and heart, body and spirit; she is beautiful because she is Immaculate, and she is immaculate because in every aspect she is beautiful, this is, a reflection of God in whose image she is made.

Contemplating she who is always free of sin motivates us to accept where we are in need of conversion; while Mary is full of grace, we must make intentional choices that open us to incremental grace. The catechesis we are called to be for young people in times of change and in this time of pandemic passes through our body and our mind, our heart and our soul: recognizing our blind spots, unveiling our hidden prejudices, acknowledging both the strengths and the weaknesses that exist on either side of the political divide, regardless of our personal vantage point. To survive COVID-19 in Salesian style is perhaps to accept these days as an ongoing “exercise for a happy death,” acknowledging and accepting with a serenity that we are not in control of our lives; that we are only in control of the responses we make in the battle of good over evil.

We become more “immaculate” whenever we strive to build communion. In these days of social distancing, isolation and loneliness have become “resident evils” that threaten communion. The catechesis we can offer is to strive for spiritual closeness, within and without. Perhaps the head of the serpent we need to put beneath Mary’s feet is this: our attitudes, behaviors, or ideologies which undermine communion, a communion which we may too easily take for granted, or which we have grown sadly accustomed to living without.

Mary our Mother, inspire in us that immaculate beauty of body, mind, and spirit that you model so perfectly.

There will be a video released each day of the novena. END_OF_DOCUMENT_TOKEN_TO_BE_REPLACED

This free event is open to everyone! END_OF_DOCUMENT_TOKEN_TO_BE_REPLACED

Thus, we can continue the historical and spiritual journey. END_OF_DOCUMENT_TOKEN_TO_BE_REPLACED