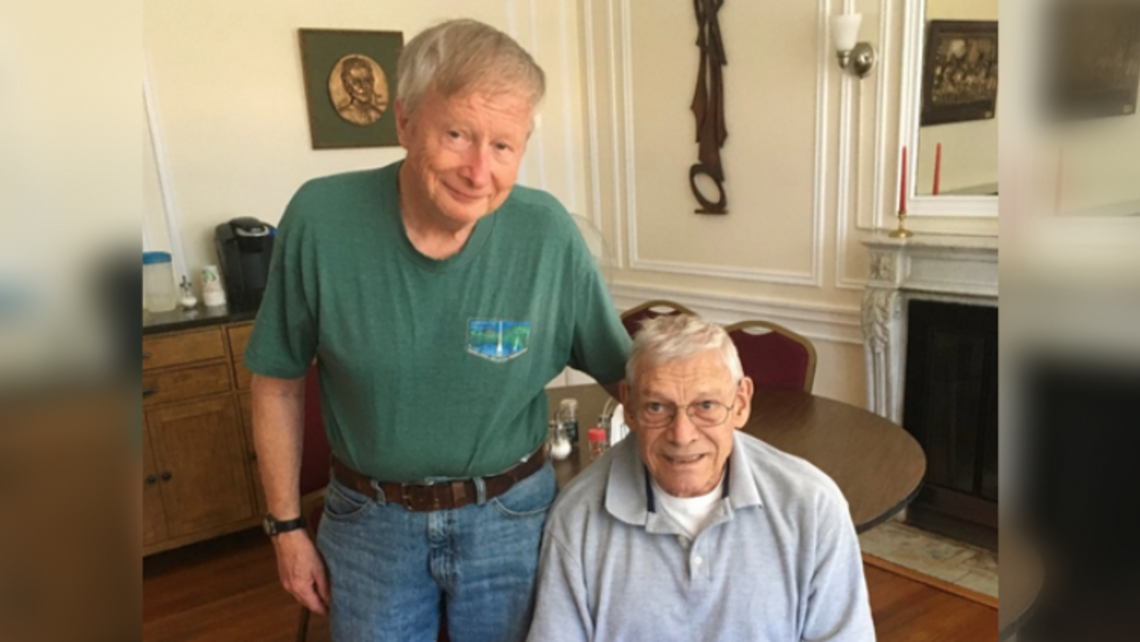 (Stony Point, NY – September 28) – A pleasant surprise from our "God of Surprises!" Just as Br. Henry van der Velden, SDB, prepared for his afternoon nap, a knock on his door informed him that he had a visitor. Br. Henry looked puzzled as he replied, "Who, me?"

As Brother entered the dining room there stood one of his past students, Jim Pidgeon from Don Bosco Tech (DBT), Paterson, NJ, Class of 1969! Br. Henry remembered Jim. That handshake began with a memorable conversation of "back-in-the-day."

Jim explained that all incoming freshmen were required to take a year of drafting. Once he completed that year, Jim continued in the woodshop under the supervision of Br. Henry and the late Br. John Cauda. When asked what he made in woodshop, Jim replied, "Whatever was needed in the Salesian houses: altars, pews, chairs, tables, all kind of furniture, cabinets, bookshelves, desks, stands, you name it, we made!" Jim’s last project was refurbishing the front doors of DBT that are now on display at the Don Bosco Retreat Center in Stony Point, NY.

What Jim learned in his years at DBT in the woodshop became his livelihood even to the present day. Jim is a master craftsmen thanks to Br. Henry and the late Br. John Cauda. When asked what he best remembered from the time spent in Br. Henry’s shop, Jim replied quickly, "Br. Henry’s laugh!"

Thanks to everyone who participated in the various events with Fr. Ángel and Fr. Hugo. END_OF_DOCUMENT_TOKEN_TO_BE_REPLACED

Thank you to everyone who helped with and prayed for this beautiful and historical visit! END_OF_DOCUMENT_TOKEN_TO_BE_REPLACED