THE PARABLE OF THE PRODIGAL FATHER (LUKE 15) 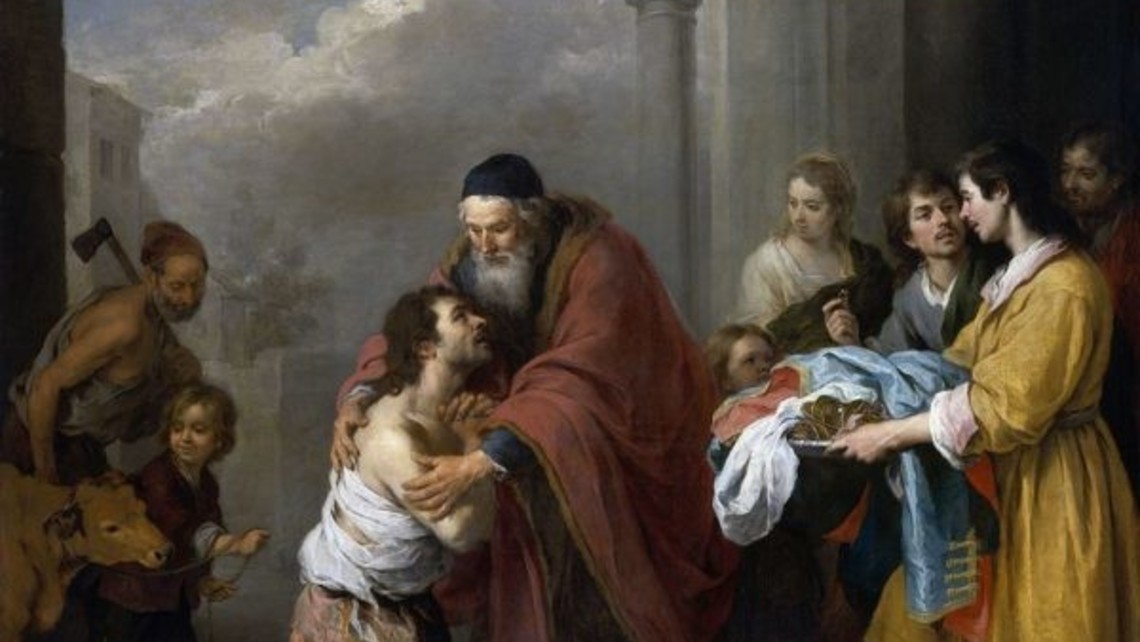 Let’s enter the home of this family in the gospel parable just as the younger son asks his father to divide the inheritance and give him his portion. We might expect a big blow-up in the household—the father terribly insulted at the request, because it would seem to indicate the younger son wished the death of his father; the younger son not really understanding the significance of his request, but holding fast to his desire for a different life, one separated from the father’s house; the older son in shock that his brother could be so bold, and yet secretly satisfied that now the family could be rid of him. However, we don’t find the big family fallout in the gospel.

Instead, we see the father divide the property and give the younger son his inheritance! I can imagine the father, with great pain in his heart, calling the steward of the household to bring the box of family treasures to him. He opens the box and pulls out what he feels are the family heirlooms—his son’s baby tooth, his first sandal that he had bronzed to preserve it, a Father’s Day card his son colored with crayons in the first grade.

The younger son has no interest in these objects that the father holds so dear. He’s not interested in hearing the stories of his childhood. He’s looking to get away and enjoy his freedom. So the father reaches into the box and takes out a velvet bag with gold coins in it. He hands the younger son his portion of the gold, and the son takes off to his new life, away from the father’s house.

Some years later, we meet up with the younger son again, and now find him in the pigsty. He is recalling that day when he asked his father to separate the inheritance for him. Now he understands with greater depth what he has already squandered. Yes, the material wealth is gone and cannot be recovered; but the more precious relationship he had with his father and his father’s household, he has thrown away as well. Maybe, just maybe, there is something here that can be recovered. He has nothing to lose if he goes back; it couldn’t be any worse than living with the pigs. And so he sets off on the road, rehearsing what he will say when he gets to meet his father.

As can be expected, the hired hands in the fields recognize the younger son as he approaches the house. Some of them laugh at him; a few spit on the ground in disgust. They say to each other, “He had everything, and he threw it away. What a fool, what a disgrace.”  The son presses on with his head down in shame. He thinks to himself that perhaps he should have stayed away. He lifts up his head just in time to see his father running toward him. The father flings himself around his son’s neck and won’t stop kissing him! The hired hands and servants can’t believe it; the son can’t believe it. What does this mean? What the son never thought possible the father has done, restoring him to his status as a son.

Today, as we celebrate Province Day, the familiar story of the prodigal son, or better the prodigal father, speaks to us Salesians about the precious relationship we have with God, whom we too can call Father. We recall how our formula for profession begins, “God my Father….” These few words establish from the very beginning that our vocation is more about witnessing to a relationship than accomplishing a task; more about being signs and bearers of God’s love, than completing the action steps in our local SEPPs.

Unfortunately, like the younger son, sometimes we are not aware of the precious treasure we possess in being called sons and seek other life experiences apart from the Father. Like the younger son, we find ourselves reduced to the filth of the pigsty.

Last month, at the penitential service during the bishops’ synod for the protection of minors held at the Vatican, Archbishop Philip Naameh of Tamale, Ghana, presented the destitute situation of the younger son as the reality in which we find ourselves as leaders in the Church. We can apply what he said to Salesians. He saw the current abuse crisis as an expression of how Church leaders have squandered what was entrusted to them—the proclamation of the Good News and the salvation of souls. We have lost the trust that others placed in us, we have destroyed others’ hopes, and we have neglected to protect the vulnerable. Archbishop Naameh says, “The prodigal son in the gospel loses everything—not only his inheritance but also his social status, his good standing, his reputation. We should not be surprised if we suffer a similar fate, if people talk badly about us, if there is distrust toward us if some threaten to withdraw their material support. We should not complain about this, but instead, ask what we should do differently.”

There is an essential question for us, as we reflect on this gospel parable, especially during the season of Lent, and as we conclude the provincial chapter. What should we do differently? It is essentially a call to conversion. Having listened to all the discussions we had during the provincial chapter, we can consider how we must change and begin to implement all those plans and projects. Having been away from the apostolate for a week, we might be thinking of all the work that has piled up and how something has to change if we’re ever to get caught up. These types of changes are necessary but superficial. The gospel conversion presented in the story of the prodigal son is much more radical, a conversion that reaches into the depths of our being. The younger son came to his senses when he began to think of his father again. Humbled, he returned to the father from whom he could not demand any privileges. This is a good example of the radical conversion we can allow to occur in our hearts this Lent—knowing ourselves in relationship to God the Father, being humble in his service, and not expecting any privileges. This is especially true of the provincial, province leadership, and the directors. Archbishop Naameh goes on to say to the bishops, and to us, the son’s situation changes when “he recognizes himself, and admits to having made a mistake, confesses this to his father, speaks openly about it, and is ready to accept the consequences.” A few points for our on-going conversion.

Lest we get discouraged by our failures and the difficulties we face in our society and in the Church, let us return to the gospel story. We left off asking what does the embrace of the father mean? The gestures of receiving the robe, the sandals, and the ring are external signs of the status of the son. He has been restored to a right relationship with the father. Having his son back in his household brings the father great joy, and he invites the entire neighborhood to a big party. The younger son could claim none of this as his own. I imagine he was quite overwhelmed by the father’s mercy. It was only beginning to dawn on him how much his father loved him and had always loved him. Our Salesian vocation, the call to be signs and bearers of God’s love to the young, is a specific and personal experience of the overwhelming love God has for each of us. Who wouldn’t celebrate! The Father in Heaven takes joy in uniting his children to himself, in and through his Son Jesus. Jesus Christ shares his joy with us in the Spirit. We are not meant to keep this love and joy to ourselves, but to tell the story of God the Father’s prodigal love for each person. In a particular way, we are sent to share this Good News with the young.

"The Spirit is the Principal Agent"

We spent the first two morning sessions listening to voices of our Salesian Family. END_OF_DOCUMENT_TOKEN_TO_BE_REPLACED

It will last from Saturday, January 22 and through Sunday, January 30. END_OF_DOCUMENT_TOKEN_TO_BE_REPLACED